You are here: Home » News » Board Approves In-Law Apartment and Pool

There were a couple of tense moments when the future of William and Tamara LaPiere’s plans for an in-law apartment and in-ground swimming pool seemed uncertain. The Rochester Zoning Board of Appeals had a lot of questions and concerns about the “unusual” nature of the LaPieres’ special permit and variance requests, and Chairman Richard Cutler was not about to just hand them out that easily.

Due to the irregularly shaped property located at 46 Paradise Lane, the LaPieres would require a variance for a property line setback for their swimming pool, even without the in-law suite addition. When asked which one was their priority, Mr. LaPiere said the pool, but what they really wanted was approval for both.

Board member Kirby Gilmore said his only concern was that a second bedroom could be added to the in-law apartment, and he wanted to place a condition that the addition be limited to just one bedroom.

There was a question as to whether or not the variance for the pool met the bylaw’s three-prong definition of a hardship, and Infinity Construction owner Robert Ferreira argued that in order to build the addition, the shape of the lot would not allow the pool to be installed anywhere else and there would be no room for further expansion on the property in the future.

Ferreira gave Cutler a printed email from the rear abutter to the property expressing support for the project.

“Okay, this is a little unusual,” said Cutler. He added that, so far, everything Ferreira presented that evening had been a little bit unusual.

At that, the public hearing closed and final deliberation began. Board member Randal Cabral said he concurred with Kirby, recommending a condition to limit the addition to one-bedroom in the future. Kirby rehashed his reasons for granting approval for both petitions, followed by a tense moment of silence until Cutler asked the board which petition they should address first.

The board approved both the special permit and the variance unanimously.

Also during the meeting, petitioners Richard and Lynette Torres had to continue their hearing for an in-law suite addition on their 157 Pine Street property because they only had a rough plan, not a certified plan, to present to the board.

“You don’t get approval without a plot plan,” said Cutler. “We need to see what the as-built is.”

“Including the proposed,” added Cabral.

Mrs. Torres told the board that the couple wanted to present the rough plan to the board for feedback before paying the expenses of having a certified plan developed if their chance for approval was slim.

“I’d say that it’s quite likely that it’s going to be ok, but we can’t vote on this,” said Cutler.

The hearing was continued until August 14, the next scheduled meeting of the Rochester Zoning Board of Appeals. 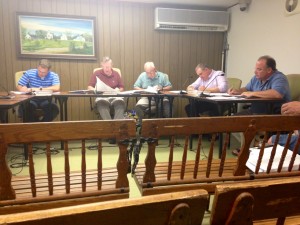