You are here: Home » News » B&E Suspect Sought in Marion

Just before 11am the Marion Police Department received a call regarding a possible breaking and entering on Ichabod Lane. The suspect in the break, who fled the scene on foot, is a white male with long blond hair pulled back in a ponytail.

Soon after receiving the call the Marion Police set up a perimeter to the neighborhood and assisted by the Rochester and Mattapoisett police Departments started to search the nearby areas for the suspect. A canine unit was requested to assist in the search.

The police spent almost two hours searching for the individual but in the end the search dog lost the scent near Blackmore Pond Road.

On Wednesday, July 25, 2012 at 10:52AM, the Marion Police Department responded to a reported house break at a residence on Ichabod Lane.

The caller reported that she heard noises in the home and upon checking, found a male subject as he was preparing to leave the home.  The male subject fled the area on foot, headed in the direction of Route 105.  A search of the area was conducted with the assistance of Rochester and Mattapoisett Police Departments, along with a K-9 unit from the Plymouth County Sheriff’s Department.  The subject was not located.

The subject was described as a white male, late teens to early twenties, long blonde hair, in a ponytail, wearing a brown t-shirt and brown pants.

At about the same time, a caller on nearby Pinewood Drive had observed a male subject, matching the description, exiting a vehicle, just prior to this incident.  The male subject went towards the direction of Ichabod Lane. The vehicle was described only as a navy blue sedan, being operated by another person. There is no description available on the driver. 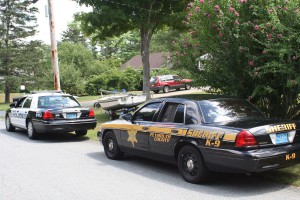