You are here: Home » News » Bank Robbery in Marion

Just before 1:30 Pilgrim Bank on Front Street, Marion reported an Armed Robbery. One suspect fled on foot towards the Spring Street Extension area and the Marion Police Department assisted by the Mattapoisett Police Department are searching along Route 6 for the suspect. The suspect was reported as a white male with brown eyes who was wearing white gauze over his face wearing a white t-shirt and jeans, possibly wearing a green hat with a grey sweatshirt tied around his waist.

Although the initial reports were for an armed robbery, later reports were that a male suspect handed a note to the teller but never produced a weapon. Two separate witness accounts identified different vehicles in the area at the time of the robbery, one a white caravan and a second brown sedan with a Florida license plate. Police searched for both vehicle but did not know if they were involved in the robbery. A K9 unit was brought in to assist with the search as well.

The following is a press release from the Marion Police Department with a photo of the suspect.

The suspect entered the bank and passed a note to the teller, demanding money.  There was no mention or threat of any weapon.  As the suspect attempted to leave the bank, a customer attempted to detain the suspect.  After a brief struggle, the suspect fled the bank on foot, towards the direction of Spring Street and Route 6.  The suspect dropped the majority of the money during the struggle.

The suspect is described as a white male, 5’-10” to 6’-00” tall, with a thin build.  He was wearing a gray t-shirt with a red “American Eagle” brand logo, blue jeans and a green and white “Boston Celtics” baseball hat.  He was also wearing white gauze bandage, wrapped around his head.

A K-9 from the Plymouth County Sheriff’s Department searched the area and was unable to locate the suspect.  It is believed the suspect may have fled to a nearby vehicle and left the area.

Anyone with additional information should contact Det. Scott Smith at (508)748-1212. 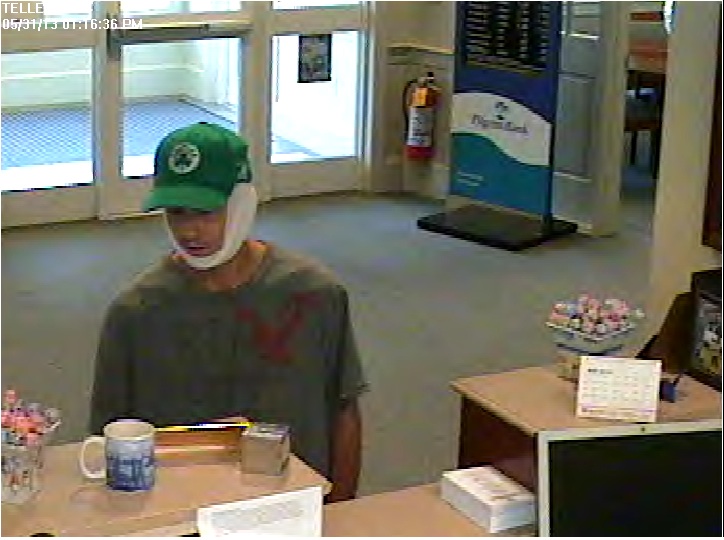 2 Responses to “Bank Robbery in Marion”