You are here: Home » News » Are Fireworks Contaminating Rochester Water?

They only gather once a year to discuss inter-town water interests, voice their concerns, and share their visions for their respective towns, so members of the Rochester, Marion, and Wareham Water Boards sat and chatted like old friends on October 23 and updated each other on the status and progress of their towns – water-wise.

Perchlorate levels are high in the Mary’s Pond/Route 152 area wells that provide water to Marion, and Marion Department of Public Works Superintendent Rob Zora said three wells in that area are currently not in use due to the problem.

“It’s coming from somewhere,” said Zora, saying he will continue to search for the source of the chemical in order to avoid spending roughly $3 million for a filtration plant.

Perchlorate is commonly found in fireworks and other explosives, leading Zora to speculate that the source may indeed be fireworks that residents have been shooting off from the Mary’s Pond ball field. Perchlorate is also found in some fertilizers. So far, only that one area is affected.

The Town of Marion imports about 95 percent of its water supply from Rochester, having only one well of its own within the Marion borders and no prospect of finding another.

The Town continues to replace its outdated water infrastructure, spending around $1 to $1.5 million per year replacing old under-sized pipes with new wider ones, as per the Town’s 10-year Capital Plan.

Rochester Water Commissioner Fred Underhill focused mainly on his “number one nemesis,” the City of New Bedford, which draws about 13.14 million gallons a day from Great Quittacas and Little Quittacas Ponds, located in Rochester.

Underhill’s concern is New Bedford’s request to increase its allocation to 25.8 million gallons per day. With Rochester’s allocation at 5.96 million gallons, the increase would exceed the recommended safe yield limit of 27.4 million total gallons drawn per day. Underhill said Rochester plans to oppose the request.

Wareham Water Department Operations Supervisor Andy Cunningham invited those in attendance to observe a new pigging technique his Town is employing to scrape the pipes of a thick manganese layer affecting the Wareham water supply.

Ice pigging is a new technology for water pipe cleaning that involves flushing the pipes with ice slurry, which uses less water in the process and less cleanup.

The group will not meet again until the fall of 2015. 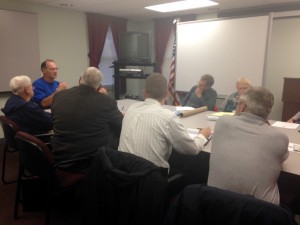