You are here: Home » News » Antique Home Will Be Updated

It wasn’t a long or busy night for the Mattapoisett Zoning Board of Appeals when they met on May 21 with only two hearings before a full board populated by Chairman Susan Akin, Mary Anne Brogan, Paul Milott, Norman Lyonnais and Kenneth Pacheco. But for one of the two hearings, it was a rather historical event.

Built in 1790, the residence situated at 6 Main Street and presently owned by Merry Suzan McCleary is one of the oldest homes in the village. Now used as a four-unit apartment building, when it was constructed 225 years ago it was a large home compared to most. It is still a large structure by today’s standards for the village area and planned to be a bit larger still.

The board discussed with Davignon the proposed changes to lot coverage that would increase from 22 percent to 27 percent. Building Inspector Andy Bobola advised the board that they had the authority to weigh the pros and cons of lot coverage by considering that the driveway would remove several cars from being parked on the street – a very busy Main Street.

The board members felt the project would ease traffic congestion in the area and the remodeled multi-unit residence would be in harmony with the village. The special permit was granted.

Also coming before the board was Brandon Ferreira, 4 Aucoot Road, with a request for a special permit to construction a 24-foot by 24-foot garage with living space on the second story. This application was also approved.

The next meeting of the Mattapoisett Zoning Board of Appeals will be announced if there are applications requiring public hearings. 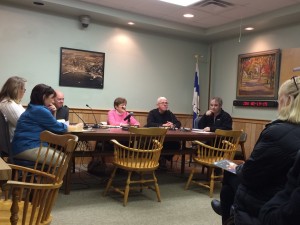