Residents came out in force, overflowing the Town Call conference room during the November 24 meeting of the Mattapoisett Conservation Commission. They had come to hear Highway Superintendent Barry Denham and Robert Field of Field Engineering give an update on the plans for repairs to Acushnet Road and the culvert. What they heard did not make them feel thankful or jolly.

Denham reiterated information he had previously shared with the Planning Board (see the November 13 issue of The Wanderer), details that included the disastrous condition of the culvert and headwalls that support the roadway.

The Massachusetts Department of Transportation regulations require that even temporary repair work had to include guardrails and handrails, and the need for concrete curing that would not be feasible given the advancing winter season and closure of asphalt plants.

Field said that they are awaiting the final Chapter 85 review and report from the DOT, and once that was in hand, they would have a better idea of construction timing.

But no matter how the information was sliced, it all came down to a June 2015 reopening if all goes well.

Those in attendance wanted to vent their displeasure on Denham. Linda Francis of 5 Bridle Path angrily asked, “Why didn’t we do something before it got this bad … what about the safety of people…!” She cited that Fairhaven’s Fire Department covers that section of Acushnet Road during a fire incident but now their services, if used at all, will be severely delayed.

Chairman Bob Rogers cautioned the crowd not to heap their frustration on Denham saying, “Barry is trying to do the best he can … no one likes the situation.”

Denham described his efforts at trying to come up with a viable temporary fix so that the road could reopen before the spring construction season, at which time the complete repair could be done. However, the State’s mandates made even the simplest plan impossible.

“The cleanest thing to do,” said Denham, “is get the culvert cleaned up and repair the road,” versus a temporary plan and then closing the road again at a future date.

Residents voiced their dismay, saying it was costing them extra time and money spent on extra gas with the detour that is now in place.

“We know we’ll be waiting for the next construction season,” stated Denham. That brought a collective groan from those who had hoped for something more positive.

Denham proposes to deploy the Highway Department to the site and begin the excavation work on the roadway and culvert area in advance of the spring repair. He said it would save the Town money by using its own employees instead of subcontracting out the entire job.

Conservation Commission member Mike King suggested that residents contact Representative William Strauss, who sits on the Transportation Committee, as a means to try and get some relief sooner rather than later, or at the very least channel their concerns.

In the meantime, Field and Denham will continue to await the final design plan from the DOT. Once that is in hand, Rogers told them to return with a Notice of Intent application.

Also on the evening’s agenda was a meeting with Daniel Eilertsen, 20 Water Street, requesting guidance on the inclusion of a stone wall on the easterly side of his lot that would have a north/south profile. He was told to apply for a Request for Determination Applicability.

Richard Charon, representing Blue Wave LLC, came before the commission with updated information on the Massachusetts Department of Environmental Protection mandate that stormwater runoff be calculated to newer standards than originally done at the time of their application.

Those standards, which he described as evolving, require that the impervious spaces be combined on the site for the purposes of determining stormwater discharge rates.

Rogers said ConCom needed a letter from the DEP for the file that stipulates why the drainage had to be recalculated, or have the Town’s engineer, Gary James, review the DEP report and the recalibrated discharge report.

The hearing was continued until December 8, when at that time, if provided with the documentation, the commission will be able to give the applicant an Amended Order of Conditions.

Rogers said the commission had received notification that the DEP appeal for the DaRosa pier project on Goodspeed Island was scheduled on the property in question on December 4. It is a public meeting in as much as the attendance of three or more ConCom members requires the meeting to be open. However, member Peter Newton made it clear that since the meeting is on private property, the general public is not really allowed to attend.

Environmental Agent Elizabeth Leidhold reported that a Chapter 61 conference will be held on March 5 at 7:00 pm in the Mattapoisett Free Public Library, and that various Town boards and departments have been invited to attend this informational session. The meeting is open to the public. Chapter 61 of the State’s general laws governs the classification of forestlands and the associated tax structure allowed by cities and towns.

The next meeting of the Mattapoisett Conservation Commission is scheduled for December 8 at 6:30 pm in the Town Hall conference room. 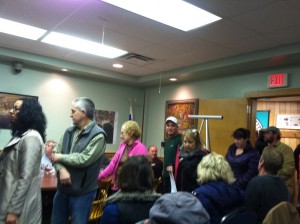