You are here: Home » News » A Range of Interests and Opinions

Mattapoisett’s Open Space Committee, whose board includes representatives from the Conservation Commission, Highway Department, Planning Board, Water & Sewer, Conservation Agent, and Recreation Department, held its first meeting Thursday, April 25. After a brief introduction outlining for the assembled the various vested interests each of the committee members brought to the hearing, public comments were entertained.

The most vocal of those wishing to be heard was Robert Gardner from the Council on Aging. He, along with a small contingent of active seniors, expressed his collective distress and desire that the public tennis courses should be kept in better repair and with more availability. The main issue raised was the poor condition of the courts located at Center School. Although the town had recently invested in repairs to the courts that are presently operational, Gardner said it wasn’t sufficient to meet demand. It was noted that although there are six courts at the high school, the gates are locked on weekends, and the courts not available when school is in session. Gardner said, “playing tennis is a matter of life and death for us … it is both physical exercise and social too”.

Chair John DeCosta stated that there are a total of 30 acres that the town owns at the Hammondtown School site, of which only 7 acres are currently developed. Should the town decide to expand tennis courts, this site might be an option, he noted.

The public learned that in the 1800s, Fairhaven got the rights to take water from the glacial aquifer located today inside the town lines of Mattapoisett. They also heard that 224 million gallons per day recede from the watershed area. The area is vast, spanning from Spinatuit Pond in Rochester to the coastline.

In 1983, the Mattapoisett River Valley Water Supply and Protection was formally organized, giving it the right to charge funds with the revenue earmarked to buy lands that would protect the aquifer. Since 1998, 475 acres have been purchased in the river valley. That, along with open space lands, constitutes a total of 600 acres.

Nick Nicholson, superintendent of the Water & Sewer Department, stated that funds were recently requested from the state by Mattapoisett, Marion, and Rochester, but that Fairhaven did not follow through. He said that the funds would have been used to study use impacts as well as water quality all which are necessary for the long-term health and well being of the water system.

It was also noted that recent lands purchased by the Buzzards Bay Coalition were outside the defined area of the Mattapoisett River Valley.

Also of interest to the group was information pertaining to the Community Preservation Act, a tool to protect open spaces, affordable housing, and other community-based needs. It functions through a surcharge on property taxes. One part of the CPA that is critical for the use of the funds is open space. The state has dispersed $150,000 to Mattapoisett and other towns annually.

Recreation Director Jeremy Collier discussed using the space, which is currently tennis courts at Center School, for other recreational activities. This idea was not warmly received by Gardner and those interested in expanding the sport, but Collier assured the group that tennis is high on the list of important activities.

Next, the committee members and the public attendees broke up into groups based on interest areas such as: outdoor recreation; preserving wetlands, wildlife, habitats, and coastal resources; improving and sustaining land conservation efforts; and water quality and natural resources.

Another hearing will be scheduled in the coming months. 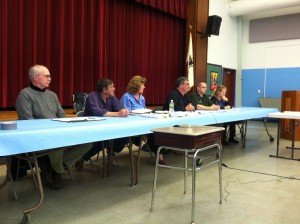