At just after 12:00 pm Thursday, the Marion Fire Department responded to Route 195 for a reported truck fire. What they found was a recycling truck from Waste Management with smoke billowing from the top.

The truck, which was travelling east through Mattapoisett and into Marion had caught fire in the open top storage are in the rear of the vehicle. The driver thought that there may have been something hot in the rear of the truck that might have started some of the paper or cardboard a blaze. He noted that the exhaust from the vehicle is configured in such a way as to not come in contact with the materials in the rear.

During the truck’s travel through Mattapoisett, embers had flown out of the vehicle and started a few small grass fires along the highway. The grass fires were extinguished by Mass Highway crews and State Police officers, and later checked by the Mattapoisett Fire Department.

While extinguishing the fire the Marion Fire Department was assisted by the Mattapoisett Fire Department and one lane on the highway was closed which slowed traffic but didn’t cause too much of a traffic delay.

After putting the fire out the Marion Fire Department made arrangements to have the truck towed to the Marion Landfill where they planned to have the contents dumped so that they could be overhauled to assure that all embers were put out. 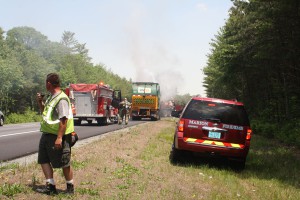