You are here: Home » News » Solar Subcommittee Meets Once More

Working off of a document prepared by member Rico Ferrari synopsizing its findings so far, the Planning Board’s Solar Bylaw Subcommittee met again on Monday night to come up with a recommendation in time for fall Town Meeting.

On this occasion, Ferrari and Steven Kokkins were joined by Planning Board member Ted North, a Solar Bylaw opponent, while the Energy Management Committee’s Jennifer Francis attended, as well.

Ferrari said that he viewed his work – which lays out broad courses of action on the Solar Bylaw ranging from full approval to full rejection, sort of a Choose Your Own Public Policy Adventure – as a potential recommendation in and of itself.

“When we voted 4-3 to let the town decide, that was an indication to me that we’re not prepared to issue a recommendation on this,” said Ferrari, referring to a recent full Planning Board meeting. “At this point, every person at Town Meeting needs to make up their own mind about what they want to do without our influence.”

Kokkins acknowledged Ferrari’s point, but argued that the voters expected a recommendation.

“I don’t think that presenting just paths and the consequences of those paths wouldn’t really be well received by the public,” Kokkins said. “They are looking for, well, I can’t say guidance –“

“It is guidance,” North interjected.

By night’s end, it was more evident than ever that the Subcommittee’s – and, in turn, the Planning Board’s – recommendation will be for voters to amend the Solar Bylaw on the floor of fall Town Meeting and eliminate the Solar Farm portion of the policy. This recommendation could include a provision to develop an overlay district for commercial solar farms in time for consideration at the annual Town Meeting in the spring.

Kokkins and North agreed that the overlay districts would provide “zoning certainty,” but Ferrari and Francis asserted that the language in the Solar Bylaw provides as much currently, and that complicating the process any further could alienate interested parties and place an undue burden on town government.

“What’s next year’s favorite commercial project, and the year after that? That’s the purpose of zoning,” North concurred. “People have to understand that there’s no inherent right to do with your property whatever you want.”

The Planning Board is next scheduled to meet on Monday, October 7. 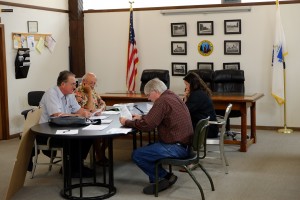