This installment features 13 Hiller Street. Extending eastward from Front Street and turning southward to meet Main Street, Hiller Street is noteworthy as a side street with a gritty appearance. It was named Hiller Street around 1900 after the enterprising family who owned most of the residences and utilitarian structures bordering this back street. The structure at 13 Hiller Street is a wood shingle Queen Anne building that may have been built as a stable. An off-center hayloft opening appears at the second story beneath the eaves. Built c. 1880-1890, this building was owned by Theodore J. Tripp, a baker, by the early 1900s. 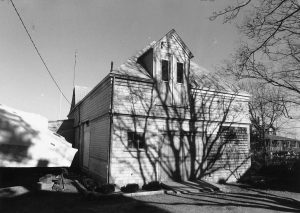