This installment features 152 Front Street.  Another indication of Wharf Village’s rise as an important commercial and residential center is the former Handy’s Tavern at 152 Front Street.  Built in 1812, it was a popular gathering place for mariners after completing a day’s work on the waterfront or celebrating the successful conclusion of a voyage.  Perhaps more importantly, it was a stop on the Plymouth-to-New Bedford stagecoach route. The coming of the railroad to Marion in 1855 effectively terminated operations at Handy’s Tavern.  By that time, it was owned by former whaling captain Ben Handy, who commanded a famous whaler called the Admiral Blake. 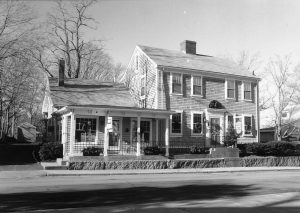