The Congregational Meetinghouse (now the Marion General Store) at 140 Front Street was built between 1794 and 1799, during the Federal period. In the 1840s, the Greek Revival style was employed to update this building, which marks the southern entrance to the town center’s small commercial district. The Congregational Meetinghouse, more than any other building, symbolized Wharf Village as an important new focus for the spiritual, commercial, and social life in Marion. It also represented the first step toward independence from its mother town of Rochester. For the first time since the early 1700s, the town folk did not have to travel to Rochester center to partake in religious services. 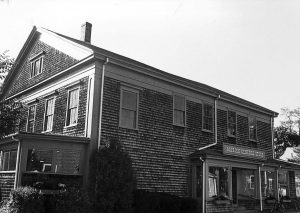