Part of the charming cottage at 312 Delano Road was built in 1750 by Harper Delano. The prominent Delano family – along with the Briggses, Dexters, and Ellises – were among the first families of Great Neck during the 18th century. A mold for making bullets for the War of 1812 was found in the basement of this house. During the War of 1812, the Delanos were well placed to witness barges carrying British troops from the Nimrod on its way to Wareham, where the crew burned a few houses in the village. By 1903, Amos Cornell owned this property. President Franklin Delano Roosevelt was related to the Marion Delanos. 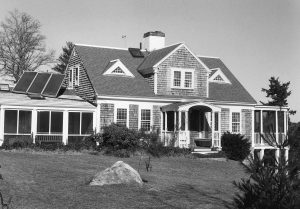