It was eight years ago, when she was being interviewed for the director position, that Roberts first recognized the potential of expanding the library into the basement. Since then, a steady flow of legalities and other projects have prevented the basement from being put to good use. The siding had to be replaced; the ramp’s angle wasn’t up to code. Now the cupola is leaking and the bulkhead doorframe has to be raised. “Just little things that happen with buildings,” said Roberts.

That’s not to say no useful projects have been completed in recent years. “There’s a small meeting room below the vestibule that was finished a couple of years ago, and last year that really started getting used,” explained Roberts.

Girl Scouts, tutors, and a new Minecraft club have made great use of this small room, but the library hopes to offer more to the community. While the small room can hold up to twenty people, the basement floor remains an unfinished expanse with the potential to seat thirty or more. Roberts sees this space becoming a great free public meeting room for Rochester.

“Libraries are becoming more and more community centers and less repositories for books,” Roberts noted. With a finished basement, “It would give them a free, eventually handicap accessible meeting room space,” she said.

The “handicap accessible” part is where things get tricky. The library is going to have to put in an elevator large enough to hold one person in a wheelchair and one person standing. Roberts compared the design to a chair lift. “It’s small, but you have to have it. If you want publically open meeting room space, it has to be handicap accessible,” she said.

While this will take up some space upstairs, the benefits outweigh the costs. The basement meeting room will be open to everyone, allowing the library to hold their larger programs on site.

“For our book sale we have to move everything to the church and then move it all back,” Roberts explained, “When the basement is done we can have the book sale down there.”

“The design and the permit stage took so long that now we have to work with the elevator company again,” said Roberts, “The estimate is now higher, because when you wait a long time for things, costs go up.”

The elevator alone is estimated to cost up to $35,000. With a grant from Makepeace, money from Covanta, and other donations, the library has about $52,000 to complete the basement construction. “Barring anything else, it should cover everything,” said Roberts. However, she did note that the library is always looking for more donations, as unexpected costs come up during large projects such as this.

“The Friends [of the Plumb Memorial Library] are going to start raising money to furnish,” said Roberts, “So we can have enough chairs for seating for thirty, we’re going to see if people want to buy a chair in memory of somebody, or honor of somebody, and we can get a little plaque and put it on the back of the chair.”

Community members interested in supporting the library’s efforts to expand may contribute by participating in this buy-a-chair fundraiser, donating, or volunteering their time. The book sale at the upcoming Rochester Country Fair is one of the Friends’ best fundraisers; those interested may volunteer to work the stand or donate books to sell.

“Any little bit helps,” said Roberts, adding that community members may contact the Friends, library Trustees, or Gail Roberts herself if they’d like to help out.

With all the plans in place, Roberts is hopeful the little updates will soon be done so the basement project can begin. “Everything should be done properly and I’m happy to wait while that goes on, but it does get a little frustrating,” she said.

After years of waiting, Roberts remains assertive yet optimistic, saying, “We’re very lucky here to have a nice supportive town like this, but I think we need to show that we really need this space.” 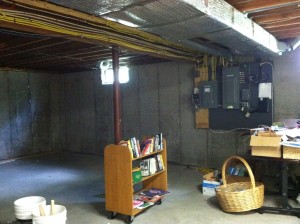