You are here: Home » Features » Wings Of Vernal Equinox

The long and anticipated moment of a new season in time began in a moment after midnight on Tuesday while we slept, when a planetary transition in space moved silently overhead as Earth slowly rotated on its axis to turn the face of the northern hemisphere into the direct rays of the sun for the first day of spring.

With the first light of a spring dawn, a sun sign for the future may rise on wings of the turkey vultures circling out of sight to follow their instinctive roadmap of a receding frost line and oversee what winter has left behind.

Across the shorelines of Buzzards Bay, the seasonal transformation we fishermen affectionately label as ice-out can slip past unaware and only be noticeable with the clarion of Canada geese that, like colorful green-headed mallards, will drop into liberated waters of ponds and lakes.

But now they need migrate only short daily distance perhaps due to global warming, which has unfortunately made the timing of ice-out unpredictably treacherous, as evidenced by snowmobiles recently falling through ice at the February traditional winter ice fishing derby on Lake Winnipesaukee in New Hampshire.

For the indigenous common loon population, however, their spring migration will be lateral rather than vertical south to north, coming inland from their ocean winter quarters while losing the salty shade of plumage. They cannot arrive unless or until it happens because they need long distances of open water to land or take off. Later, when love is in air-temped waters, the mournful wail of the loon to locate a mate will finally be echoed in the night by a musical yodel, called a tremolo, a possessive announcement near a nesting site for the next generation.

At our new shoreline residence, with arrival of each new feathered flight we watch for the arrival of the ospreys to the elevated wooden platforms erected on our nearest neighbor’s back yard, wishing for an estimated time of arrival like an airline flight from Florida, also their traditional winter retreat. One of the two platforms has a nest from last year, and it is very possible the same pair can and will find their way back.

In keeping with the joy of the season, may my narrative and image on Wings Of Vernal Equinox take flight in your mind to soar on thoughts of the wonder of it all. 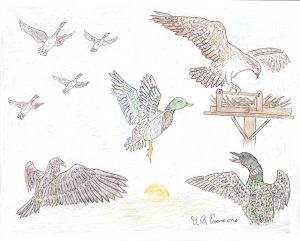