You are here: Home » Features » Where Houses Speak

He warned us that he’d jump from current day to many centuries prior, so we strapped on our virtual seat belts and began our journey. Speaking almost without pause except when passersby cheerily greeted him with a “Good to see you,” Seth Mendell transported us during his walking tour of Mattapoisett. This special event was one of many being offered by the Mattapoisett Historical Society Museum. Certainly no one would have been better suited as our guide.

Mendell’s historical knowledge, not only of Mattapoisett but of much of New England and beyond, pours from him like the outgoing tide at Eel Pond. One finds oneself taken back in time as he describes the people, the industries, and the structures that comprised those yesteryears.

Stepping off from the Christian Church that houses the Mattapoisett Historical Society Museum, he began the hour and 15 minute tour that took us back and forth in time – a time Mendell has forged in his memory bank.

Of the museum, he said that a man by the name of Elder Faunce set up a trust for the church building that at some point in its own history was claimed by the Baptists, hence the name of the street that runs along the west side of the property. In 1958, the newly-founded historical society – yes, Mendell’s ancestors were part of that group – partnered with the church trustees to give the town its precious gem of a museum. In 1968, the society built the carriage house. Today, the rental agreement between the society and the church trustees continues in what he described as a type of ‘Hong Kong’ lease.

In 1821, the shipbuilding industry of Mattapoisett was in full swing. But prior to that, the first settlements were along the river where agriculture was the primary focus. It wasn’t until the 1800s that shipbuilding became a major industry for this tiny community.

As Mendell explained, by the 1800s whales had been so heavily fished in local waters that the hunt went farther and farther away from the shores of New England and Nantucket. All one need do is read Melville to glimpse that reality.

Ship builders whose talents became regarded as the best available moved to Mattapoisett and set up shop. Thus, this area was thrust into an industry that for many decades to come was in high demand.

As we strolled from the museum, there didn’t seem to be a building that Mendell could pass that didn’t speak a memory to him worth sharing or a story worth elaborating upon.

Take the Town Hall for instance. Town Hall was built in 1896 and for that specific purpose. Four investors – one being George Purrington, a forefather of Mendell – funded its construction. Early on, it also housed the first fire and police departments. He said he remembered a large metal cage inside the first floor where the cops would lock-up those who wandered outside the lines of the law.

The Town Hall’s second floor was a large open space used for dances, town meetings, movies and other gatherings. He recalled watching newsreels on sweltering summer evenings while sitting on hard benches: A far cry from the lavish movie theaters of today. He pointed out that the small tower we see today on the Town Hall building had once been another story higher. Like many buildings he described during the tour, the Town Hall suffered severe damage from the 1938 hurricane. That was when it lost the top of its tower, which never returned to its former height.

He pointed out 6 Church Street as a home once belonging to a Mr. Tabor, a whale-man. Not to be confused with whale-boat captains, whale-men worked on the boats and also earned vast sums of money during the height of the whale oil demand. 4 Church Street belonged to Mr. Johnson, a cabinet maker. Mendell said that there were many shops sprinkled up and down the village streets, many taverns and public houses, boarding establishments and other businesses. As the shipbuilding companies proliferated and prospered in Mattapoisett, supporting enterprises were needed to supply the population with its needs for goods, food, drink and lodgings.

Across from Ellis Square, the apartment building at 13A and 13B Main Street was once a store owned by a retired whale-man named Eldridge Caswell. At this intersection, he also described the introduction of modern transportation: the electric rail. It ran up Church Street to where Oxford Creamery is today. He told us about mass transportation hubs from New Bedford to Onset long before the automobile became America’s most-loved machine. My own maternal great-grandparents, the Ransoms, traveled on those rail cars from New Bedford where they lived all the way to Onset by the bay. My grandparents eventually moved to Onset, but continued to travel through Mattapoisett on their way to New Bedford to do the monthly shopping. They must have disembarked here in Mattapoisett and found it a restful place indeed. They have long rested in Cushing Cemetery along with their daughter, my grandmother. But I digress.

14 Main Street was a restaurant owned by Mr. and Mrs. Barrows called ‘Anchorage By The Bay’. Prior to being at this location, it sat squarely in the middle of what is today Shipyard Park. Again, the 1938 hurricane had its way, smashing that panoramic multi-paned eating place with explosive power. The Barrows reopened a bit farther from the open winds and waters.

12 Main Street was also a tavern in the 1800s and ol’ Solomon Leach’s binnacle shop was located in the back. For those, like me, who don’t know what a binnacle is, it is the housing around a compass.

Moving farther along, Mendell said that three houses along Main Street (6, 8, and 10) were owned by the Rodgers brothers. They had relocated from Nantucket when those larger whaling ships were in demand and brought with them much sought after expertise. Like many early residents, the Rodgers family shared their wealth and good fortunes. They helped fund Center School.

Pointing across Main Street to the marshlands, he said that in the 1800s it was not as filled in and vegetated as it is now. One of the Rodgers brothers was able to build and float a whaling ship there, which is something our modern minds might have a hard time conceiving.

Stopping at what is today the Mattapoisett Land Trust’s ‘Munro Property’ across the street from what was the Willis house at the corner of Pearl and Main, Mendell told us about the three-story mansion that was wiped out in the 1938 hurricane. Collective memory being what it was at the time, no one remembered a hurricane powerful enough to demolish a structure so sturdily built. So Lewis Stackpole built his huge home on the beach area now belonging to the “Sands” resort. All that paradise ended in the fateful 1938 hurricane.

While standing at this lovely site, Mendell told us about the War of 1812 – which actually was three years long – and the advance into our harbor of the British ship, HMS Nimrod, in September 1814. The mistress of the Willis house (2 Main Street built by Elijah Willis) ran to the Olive Branch School (the yellow house now situated across the street from Center School) where she rang the bell, warning the residents that the British were coming. The Mattapoisett militia was successful in turning back the British. The Brits headed north to Wareham where they burned everything in sight.

As we reached the wharves where so many people today enjoy Mattapoisett’s waterfront, Mendell said that many shipbuilders established their businesses here cheek to jowl. The land needed to set up a shipbuilding shop only needed to be as wide as the ship itself. Therefore, many shops lined the waterfront in narrow strips. Names such as Cannon (more than one), Barstow, Holmes, Hammond, and Meggs worked side-by-side in friendly competition. There was plenty of work for all.

Other slices of life from by-gone days that Mendell imparted include: Cannon Street was known as ‘clam shell alley’ because the residents would throw their shells onto the street to keep the dust down; 7 Water Street (which is adorned with a plaque) was the home of Francis Davis Millett who went down with the Titanic in 1912; Goodspeed Island was the site of a major salt works, an industry that helped the financial solvency of the area; entering the town from the harbor must have been quite a sight, Mendell speculated, with windmills for the salt works and giant whale ships riding high in cradles in various stages of completion; the YMCA building was a mansion built by Charles King who had his own rail car called ‘The Dude Special’; King was also responsible for building the Reservation Golf Course; 1 Water Street, built in 1746, is claimed to be the oldest house in Mattapoisett; the Wanderer and the Acushnet of Melville fame were built in Mattapoisett; the Inn was once the Meggs Tavern.

The tour ended where it began – at the museum – and was certainly only a small taste of all the history Mendell could share. It was just all the history his 81-year old frame could impart at that moment.

The Mendells now spend the summer months here and the winter months in Florida. While he is here, though, Mendell will be involved in enriching the historical experiences available through programs at the Mattapoisett Historical Society and other venues.

If you have an opportunity to hear Seth Mendell speak about the people, places and events of the past, do yourself a favor: Go and absorb all you can. People like Mendell, with such a depth of knowledge, are treasures to us all. 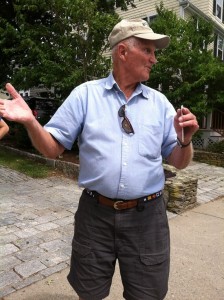