You are here: Home » Features » Welcome Back, Marion Block Party

The weather was as warm and inviting as the atmosphere at the 2012 Marion Block Party.  The almost annual fest, held in front of the Town Hall, attracted hundreds of people this year to eat some bar-b-Que, kibitz over classic cars, and enjoy summery songs from local musicians.

“It’s what Marion’s all about,” said Jennifer Lagrotteria.  She and her husband had friends visiting from Annapolis this weekend and decided to join the party.  “There’s something for everyone.”

The party, which dates back to the first Marigold Festival in 1887, is held to raise money for community purposes.  One of the first projects that was funded by the party was the Marion Social Club, which was originally located on the Nelson Block.  Over time, different groups sponsored the event, but in recent memory, it has been the local VFW that has taken over organizing it.

They led the sponsorship until 2010,” said Block Party chairman Steve Gonsalves.  “But a lot of members have passed or just gotten older and they weren’t able to carry on the tradition.”

As a result, the party was not held in 2011.  Since then, the Marion Fire Fighters Association and Marion Recreation volunteered to take over in conjunction with the VFW.

“It’s really in their [members of the VFW] honor.  We’re going to continue the tradition, but it’s up to the younger generation to step up to the plate and take charge,” Gonsalves said.

This year, the money raised from the Block Party will go to fund the construction of a new playground in Washburn Park, as well as the purchase of a new thermal imager for the Marion Fire Department.

“It’s an electronic camera that works off heat images.  When you’re going into a fire, your vision is limited.  We use them to help locate victims we can’t see,” said Fire Chief Thomas Joyce.  The new camera will replace the original one that dates back to the early 1990s.

The party ended with a huge bonfire in the field behind the Town Hall, next to Sippican School.  Scrap wood piled 20 feet high blazed loudly as pockets of residents stood around to watch.  Some held hands, some snuck a kiss in the fire light.

“It’s a coming together of the people,” said Sippican Historical Society and Museum curator Pete Smith.  “With any luck, they may see an old friend when they are here.” 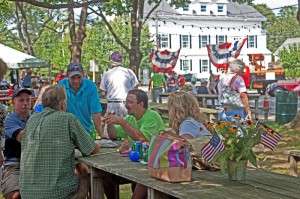