It’s a precious thing – an unhurried walk through the late summerwoods to bid farewell to August and welcome in September. This last week of August is a special week in nature for those who take the time to look around and notice the subtle transitioning of the two seasons – bridged by the harmonic hum of choiring crickets that will eventually dwindle down to a few diehard solo performers as the chilly nights progress into frost-covered mornings.

The shadows of the trees are growing longer in the afternoon sun, and pine needles revel in the light and warmth of spatters of golden sunshine – as did I on Tuesday, August 25 during my first visit to Doggett’s Brook off Dexter Lane in Rochester.

Doggett’s Brook is the latest of the Town of Rochester and Rochester Land Trust’s conservation projects, for which the Town and the RLT is about to formally introduce to the public during a grand opening reception on Saturday, September 13 at 1:00 pm.

A new loop trail, two years in the making, now links about 100 acres of conservation land after a grant from the Makepeace Neighborhood Fund was used to improve the loop trail, with a new map display, kiosk, and bright blue trail markers to guide hikers through the 1.4 mile trail that wanders past wetlands, the brook, open meadow, and woodlands.

Spotting the green and white sign marking the trailhead located across the ball fields, I cut across the baseball diamond and made my way past the new sign and down the gravel path, stopping to pick up a turkey tail feather, which I always consider good luck, and then pausing by the swampy pond to my left – plop … plop, two shy frogs leapt into the water upon hearing my footsteps approaching.

The crickets, not shy at all, sang louder with a crescendo of noise as I passed the kiosk and entered the drying, browning meadow, raging against the dying of the light (a little Dylan Thomas for you) until the woods enveloped me from all directions, going counterclockwise around the loop along with the flow of the brook, now down to a trickle this late in the season.

The trail splits, with one main trail continuing on while an alternative trail, its opening almost hidden behind a big old tree stump, bears to the right and follows the bank of the brook. Two roads diverged in a soon-to-be yellowing wood and, like Robert Frost, I took the road less traveled by, (“because it was grassy and wanted wear”), and climbed up and down the rising and falling embankment along the brook, taking it slowly so as to not miss a single detail along the way. For this will all be over soon, the last dying days of summer that will yield to fall and then to winter, and the exceptionally warm, humid afternoon made the walk feel like moving through a warm bath.

Now I am walking along the narrowing footpath, the thin web-like threads linking tree to tree breaking across my chest – evidence that I was the first to trod down that path that day – noticing the small clusters of late-blooming monotropia uniflora, the white waxy Indian Pipes, those delicate, little white ghosts that haunt the forest floor, until the two paths converged again deep in the acreage of the Doggett’s Brook woods.

The loop winds around until the path becomes obviously new, freshly cut back and blazed, waiting to be flattened down by the footprints of new hikers. The trail directly abuts private property, and the blue blazes kept me on track and away from the paths that lead to some back yards along the perimeter.

I found several four-leaf clovers and a couple five-leafers before exiting the meadow, the same meadow that greeted me when I first arrived – no leprechauns, but my gold was gold of the late-summer wildflowers and the orange setting sun. Still wearing the thin threads of the woods draped across my shoulders, I walked back past the kiosk into the glaring sunset across the baseball diamond.

I think you will like this particular trail and all its enchantments. The September 13 grand opening offers a short dedication, refreshments, and guided tours by local naturalists. Mark your calendar, see you there, and for goodness’ sake, go take a hike! 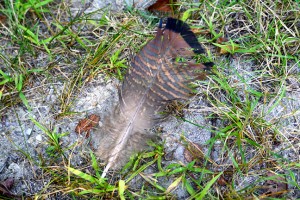 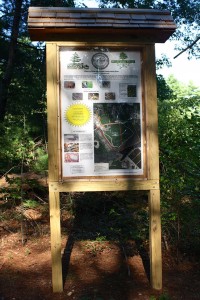 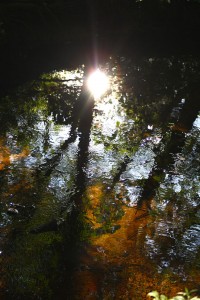 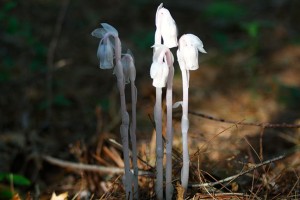 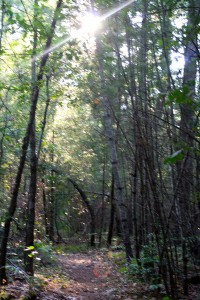 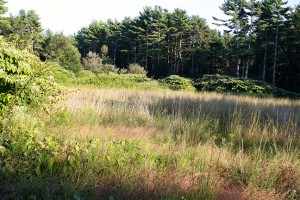 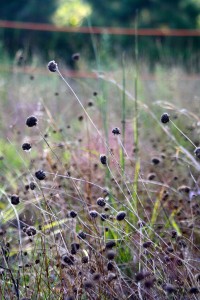 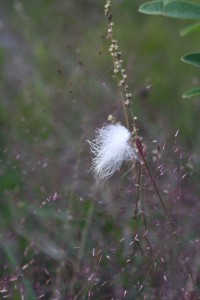