You are here: Home » Features » The Year in Review

Here at The Wanderer, we like to look back in our final issue of the year and remember the happenings, goings-on, and stories that we brought to you in the 51 other issues of the ending year. In this edition, we recall the noteworthy news and occurrences – some that you might have forgotten about (there were a couple we didn’t come up with at first glance back) – along with a number of issues that have arisen in each of the three towns of Tri-Town that may have been resolved or may linger into the new year.

And now, we bring you Tri-Town: The Year in Review….

No issue brought more people out in force than the application for a private pier extending 180 feet into Mattapoisett Harbor from Goodspeed Island. Several hundred people came out on two occasions to air their concerns during Conservation Commission and Mass DEP hearings. The application is still pending final resolution with no clear end in sight, which will take the matter well into 2016.

Throughout the year, the Mattapoisett Police Department received an increase in calls to the Hillside Motel. Criminal activities, domestic conflicts, and numerous public safety violations forced the selectmen to give the property owners an ultimatum: clean up and repair the premises, discontinue long-term rentals, and accept only guests with proper identification, or lose their permit to operate.

And then there was the Acushnet Road culvert. When it collapsed, the Highway Department was forced to close the road, detouring residents and through traffic several miles to get from point A to point B. Disgruntled residents met with the Planning Board on more than one occasion expressing outrage as the road closure stretched from weeks to months. At long last, they and everyone else inconvenienced received an early Christmas gift when the road reopened in November.

The Friends of the Mattapoisett Bike Path and the Bike Path Committee continued to plug away at an avalanche of ever-changing technical documentation imposed on Phase 1B of the project by the Mass DOT. Changes within the state agency caused the project to get bogged down with new regulations, forcing the two groups to try and secure more funding for engineering studies and tests. The bike path is on track to secure over $1 million in state funding that would see the project nearing its goal of crossing wetlands, Route 6, and heading towards the Mattapoisett Business Park. That funding is hanging in the balance as the group attempts to have their RDA application approved by the Mattapoisett Conservation Commission for test borings – one of the latest technical hairpin turns the project has had to face.

The Water and Sewer Department was kept busy earlier in the year with a massive sewer extension project from Point Connett to Angelica Point on Cove Street, a barrier beach. They have also recently completed infrastructure improvements on several village neighborhood streets. These upgrades are part of a long-term improvement project. The town plans to apply for state grants to help offset the price tag. As village streets were opened, gas lines were also updated making that area now more modern below grade than above.

Out on the edge of town along the Fairhaven border, a little piece of paradise now exists in the form of a new walking trail that leads from Fairhaven to the Nasketucket Bay State Reservation. A partnership between the Towns of Mattapoisett and Fairhaven and the Buzzards Bay Coalition secured land through the bucolic pastures of the DeNormandie Farm off Shaw Road in Fairhaven and connected to established trails that lead to grand panoramic views of Nasketucket Bay. The state reservation is a precious gem practically at our front door.

The highlight of the year for Center School students was likely the night that Associate Principal Kevin Tavares spent on the school roof. The event attracted a lot of spectators, including a local TV news crew. What will Mr. T come up with for this year’s challenge?

The quaint and quiet seaside town of Marion saw its share of drama, especially earlier in the year amongst its own town boards when members of the Planning Board just could not agree on even simple matters such as meeting minutes. Planning Board Chairman Stephen Kokkins was ousted during the May election by newcomer Jennifer Francis, and Stephen Gonsalves was reelected for another term on the Planning Board.

Board member Robert Lane, the former Planning Board clerk who landed in the center of meeting minute madness, took over as chairman and Norm Hills, a leading critic of Lane’s style of writing minutes, assumed the responsibilities of clerk, which eventually freed the minutes matter of most of its contention.

Lane began his chairmanship on June 1 by promising an “expeditious process” for a solar farm application for Clean Energy Collective, the first applicant under the Town Meeting-approved solar bylaw. Instead, what ensued was a four month-long solar farm saga, mainly over a disagreement of an appropriate sum for a decommissioning escrow account. Lane was adamant about a substantially larger dollar amount than the applicant, and he did not budge on the amount with support from a few other board members. On October 5, the board finally approved the Special Permit, still with a substantial amount but slightly less than the $75,000 originally demanded.

The Planning Board also continued in its efforts to build a Master Plan and temporarily gave up on its mission to craft a more stringent zoning bylaw that would deter “big box” businesses from coming to Marion. After a number of meetings over the course of a few months, the board voted to table its attempt at a bylaw, which never made it to the Town Meeting warrant.

Meanwhile, there was not a peep from the proposed CVS developer this year. The Conservation Commission, having not received a response from Mark Investment or its representative LED Environmental Consultants, closed the public hearing on August 26 and rendered a positive determination to the unconfirmed wetlands lines – positive, meaning negative for the developer. No subsequent Notice of Intent application was filed by the developer.

Marion, ever since the first mention of the threat of stricter NPDES permit requirements in 2014, spent the entire 2015 year on pins and needles waiting for a response from the EPA as to whether it would allow the town to explore other alternatives to mitigate water pollution rather than having to shut down the wastewater treatment plant’s three sewage sludge lagoons.

Town Meeting appropriated $450,000 towards preliminary engineering and studying feasible alternatives, as well as for legal representation, should the town require it. The Capital Improvement Planning Committee even had to bump three major projects off its priority list for fiscal year 2016 in light of the impending costs. As 2015 comes to a close, the town is still uncertain about the future of the wastewater treatment plant and weary of a possible $20 million price tag for wastewater treatment upgrades.

In addition to the NPDES permit decision, Marion moves into 2016 not knowing how the Town House renovation will play out. Selectmen have chosen to focus on a Town House-only option as opposed to broadening the project’s scope to include library expansion and a new senior center. Town Meeting members will decide the project’s fate eventually.

Marion’s 40B housing development opened its doors this year to become home to about 30 affordable housing tenants/families, but not before damages from a fire in one of the buildings the night of February 19 caused extensive damage to a number of units. The flames lit up the night as the three-alarm fire required assistance from four surrounding towns. Firefighters battled cold temperatures and high subzero-degree winds that night.

In Rochester, the word this year was ‘solar.’ Rochester saw a number of applications for solar farms in different areas of town, but none garnered more attention than the one proposed for the historic center of town.

News of the proposed solar project during a June Board of Selectmen meeting spread quickly, and the June 23 Planning Board meeting, which served as a pre-submission conference with the developer, was a jumping off point for board members to express their concerns and general sentiment of opposition to a solar farm smack dab in the historic district.

The 10-acre solar farm was downsized to five acres after a few heated exchanges with the Planning Board and concerned citizens and abutters. The project scope was cut in half to accommodate more screening, the main concern of all involved.

Town Meeting just weeks prior had approved an amended zoning bylaw pertaining to development within the newly established limited commercial district; however, many on the Planning Board and bylaw subcommittee, including ZBA Chairman Richard Cutler, had significantly different ideas about development in the center of town than a solar farm. Unfortunately, as Planning Board Chairman Arnold Johnson pointed out on October 13, the new LCD bylaw wasn’t going to cut it when it came to stopping the solar project from moving in, admitting that language in the bylaw did not specifically prohibit the cutting down of trees within the mandated 20-foot perimeter buffer zone – a bone of contention, especially around the historic cemetery where several old trees would be cleared.

The process continues with the historic district solar farm, as it inches closer and closer to Planning Board approval.

Back on July 20, Greenwood “Woody” Hartley shook things up when he requested the Board of Selectmen reopen their meeting to allow him to speak, announcing that he had received knowledge that the Annual Town Meeting held on June 8 went on without a quorum of 100. Selectmen appeared surprised, but admitted that they, too, had only recently heard about the blunder.

The Town, with assistance from Town Counsel Blair Bailey, sought relief from the attorney general, only to later be told that the proper avenue would be to petition the governor to sign a letter endorsing the special legislation to ratify the Annual Town Meeting. As of December 28, selectmen say the special legislation approval is imminent.

Back in early April, Rochester was the scene of a movie set, which caused quite a stir once people heard that Jennifer Lawrence, Bradley Cooper, and Robert De Niro were the stars of the film.

The set for the movie “Joy” was temporarily based out of the Rochester Golf Club, and film crews were spotted on Hartley Road. The Wanderer broke the story, satisfying residents’ curiosity over why the road was blocked while intensifying the imaginations of those hoping for a glimpse of the stars, although film crews asserted none were in Rochester. (Sure they weren’t.)

Rochester shared a precarious transition period with Mattapoisett as the new automated trash pick-up system was implemented. Residents in Rochester who opposed the new system made their opinions known to the town administrator, who eventually said the transition took place as relatively smoothly as possible, although back-to-back snow storms made getting used to it more difficult.

Oh, back-to-back blizzards. Remember those? The year 2015 just left with a balmy bang this holiday season, but what’s in store weather-wise for 2016? Last year, Punxsutawney Phil was right about six more weeks of winter. Will he be right again this year?

And how about those Bulldogs! The Old Rochester Regional Boys’ Basketball team made us all proud this year when they won the Division III state basketball championship – let us not forget their triumph. Go ‘Dogs!

With this last issue of 2015, The Wanderer heads into 2016, proudly entering its 25th year as Tri-Town’s go-to weekly paper. And, to quote most 25 year olds, “Oh my God, we are so getting old.” Here’s to another notable year in the Tri-Town!

By Jean Perry and Marilou Newell 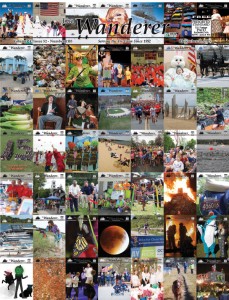