You are here: Home » Features » The Thrill Factor

Something is happening. It actually started a few years back, but it has become more apparent as of late. I think I’ve heard it referred to as “creeping old age.”

There are the pains that were once sporadic with only the occasional visit, but these pains have now become, well, not old friends but certainly reliable ones. The back pain, the bursitis in the hip, and of course, the forgetfulness – these are the reminders that the wheel of time is grinding me down, literally shrinking me into my own crepe-like skin.

A dear friend of mine, whose brush with Mr. Reaper a couple of years ago was terrifying, has a little saying that she’s coined, “Sixty-five and ALIVE!” Yes, it is a joyous thing to wake up each day – pains and all. I accept the reality that even for me, time will not acquiesce.

So, I keep busy lining up a daily to-do list, hoping to make some sort of contribution to the here and now and looking forward to more of that precious commodity known as time.

To that end, I’m doing what I’m sure Joseph Campbell would recognize as living on the edge in an attempt to know that I’m really and truly alive.

Campbell – scholar, philosopher, and frequent guest on PBS – was expert at dissecting myths, legends, and religions with a storyteller’s finesse. Campbell brought the myth of the hero into a modern context: that of a police officer who climbs on the ledge with the person threatening to commit suicide and puts his/her own life in harm’s way for the sake of saving another. Thus, in that moment as life weighs in the balance, it is also timeless, every breath an eternity, and the act of being alive, oh, so very real.

We can’t all be heroes of that magnitude, but maybe I can just be a person who challenges herself and says aloud to the devil of doubt, “Yeah, well I can so do that!”

Hence, I’ve signed up for the annual Lions Club triathlon.

I know it’s not on the same scale as sacrificing one’s life in service of others, but there is that personal thrill factor. Real athletes know the feeling; they understand the challenge they put themselves through. I’ve got a tiny taste of that and the flavor is so good.

Now you may be thinking, “I know this woman, and she is nuts to think she can do this thing.” Frankly, you would be right. You have to be just a little bit silly in the head to believe that you can swim, bike and run in succession and still be able to breathe without medical attention afterwards. I’ll add especially silly in the head given my un-athletic physique and being of a certain age. That’s not going to stop me, though.

I have a strategy. First and foremost, this will be a team effort. I have a partner in crime who has obliged me by offering to take care of the swimming leg of the race. Yours truly will take on the biking and speed-walking bits. I’ve thrown down my own gauntlet and picked it up.

With some adjustments in how I use my body, prepare my body, and gird my mind for the quest, I believe that with a bit of training and a few adjustments to the old bike that has waited for my return these past 17 years I can, in fact, “get ‘er done.” Or, as they say in AA, “Fake it till you make it.” In my case, those clichés mean the same thing.

None of this easy, for sure. It’s been slow. There was the day I had to get off the bike because the pain in the left sitz bone was like a Spanish Inquisition torture. With some ingenuity, I modified the seat and can now ride nearly pain free: “Climb every mountain; ford every stream” or something like that.

The plan is simple: just go at my own pace and finish, just finish. I’m doing this because I can. My friends can’t, my parents can’t, but for them and myself, I can at the very least try.

I fully expect to be in the far back of the pack, possibly even the last one over the finish line. I hope the event organizers don’t remove the equipment from the course before all the participants have a chance to cross the finish line. When the goal is simply to finish, that is the prize sought. That is the thrill. 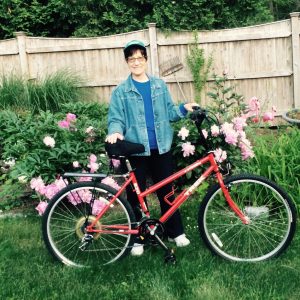