You are here: Home » Features » The Poop on Your Pooch’s Poop

It is unfathomable that in a town so tame, so beautiful, so willing to provide doggie doo-doo bags for free there are people with little respect for their fellow residents. These scoundrels are the people that don’t clean up after their dogs. I’m going to go out on a limb here and say that people willing to leave their dog’s poop behind as they continue on with their walk don’t even have pride in themselves. How could they?!

Do a little Internet research and guess what you find. That’s right: Dog waste is bad. “Dog waste is an environmental pollutant. In 1991, it was labeled a non-point source pollutant by the Environmental Protection Agency (EPA), placing it in the same category as herbicides and insecticides; oil, grease and toxic chemicals; and acid drainage from abandoned mines.”

Recently, as I was walking with my pup Harry, I was horrified at the volume of dog feces along the roadside heading out to Goodspeed Island. The fact that there is a station strategically located at the very entrance to the area with poop disposal bags and a trash barrel for quick and easy cleanup seems lost on many pet owners. What the heck, people? Is it too much to ask you to stop for a second and get the mess off of the ground so that the next person coming along 1) doesn’t have to look at it; 2) doesn’t have to step in it; and 3) doesn’t have to worry about getting sick from it?

Then, as if that wasn’t bad enough, as we walked along Water Street heading toward Town Hall, I was horrified at the piles left on people’s lawns … people’s lawns, but wait … also on the lawn of our very own Town Hall! Who does this?

Continuing on to Mello Wharf after a brief stop to introduce Harry to Mocha, we ventured onto the small land trust area beside the wharf. This should be a refreshing venue, a place to enjoy the sea breezes and the harborside vista, but no. The grounds are littered from end to end like a cow pasture. Who would want to memorialize their loved one with a park bench at this location when it is a checkerboard of crap? Money has been spent to give the public this priceless little jewel, only to have it desecrated by careless dog owners. I’m disgusted, disappointed and sad.

How about going for a swim or digging for clams?

“It has been estimated that a single gram of dog waste can contain 23 million fecal coliform bacteria, which are known to cause cramps, diarrhea, intestinal illness and serious kidney disorders in humans. EPA even estimates that two or three days’ worth of droppings from a population of about 100 dogs would contribute enough bacteria to temporarily close a bay, and all watershed areas within 20 miles of it, to swimming and shell fishing.”

And then there is Ned’s Point Road. The shaded canopy, the fantastic homes, the ocean view at the end of the street: What is not to love, I ask you, with tears in my eyes? The dog mess at your feet, of course.

It makes you wonder what the owners of these dogs are really thinking. Are they thinking it’s OK to let their dog soil the grounds because someone else will clean it up, or “Gee, I forgot a bag, I’ll remember next time.” I think that people who can walk away from their dogs’ piles are simply hateful users who don’t give a rat’s behind for anyone but themselves, whose sense of entitlement includes spoiling public spaces or whose daytrip to our town means they are exempt from local bylaws and common decency. It is unlawful, after all, to let your dog poop and not clean it up, with up to a $200 fine.

I’m for allowing a citizen’s arrest of anyone who chooses poo over cleanliness! I’m going to ask Chief Mary Lyons if I can be deputized like in the John Wayne movies. How about returning shame punishment in the form of public stocks located in the center of Shipyard Park? Yeah, that’s the ticket. How about making them wear a brown t-shirt with a giant letter S on the front; think The Scarlet Letter. Or video surveillance? Would we be surprised who’d get caught casually walking away from a pile? Or how about anyone found violating public spaces with their canine’s waste having to spend a week cleaning the whole town in the manner they neglected to impose upon themselves?

“According to the U.S. Centers for Disease Control and Prevention (CDC), pet droppings can contribute to diseases animals pass to humans, called zoonoses. When infected dog poop is deposited on your lawn, the eggs of certain roundworms and other parasites can linger in your soil for years. Anyone who comes into contact with that soil – be it through gardening, playing sports, walking barefoot or any other means – runs the risk of coming into contact with those eggs; especially your dog.

“Some of the hard-to-pronounce parasites your lawn could harbor include Cryptosporidium, Giardia, Salmonella, as well as hookworms, ringworms and tapeworms. Infections from these bugs often cause fever, muscle aches, headache, vomiting and diarrhea in humans. Children are most susceptible, since they often play in the dirt and put things in their mouths or eyes.”

Listen, we all make mistakes, but it isn’t a mistake to take your dog for their nightly constitutional knowing the very reason you are out there in the dark is to let your dog defecate on the ground and then leave it there to mummify in the sun and wind – or worse.

I hope and trust that if you see someone violating the doggie cleanup bylaws, you will speak up. It might not make that person do the right thing, but maybe the next time they will, and at least you would have dealt out a good dose of righteous indignation aimed at a deserving (fill in the blank)-head. 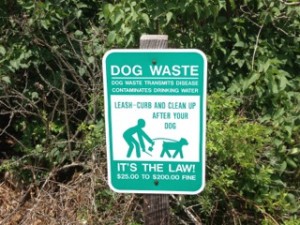 3 Responses to “The Poop on Your Pooch’s Poop”