You are here: Home » Features » The Not-So-Popular Pigeon

The everyday ordinary pigeon frequently flying over our heads, along roadside travels, or perched on the roofs of neighborhood barns and buildings, is actually classified as a rock dove. It is named for nesting and perching on rocky ledges, and under bridges and outcroppings. Not native to this country, it is a descendant of birds brought to Nova Scotia by the French in the early 17th century. In all this time, they have proliferated far and wide into residential farm country and, more noticeably, into cities, public squares especially, where the frequent refuse of messy habits has devalued their presence in the eyes of metropolitan bird watchers. There now on ledges of skyscrapers, pairs of nesting peregrine falcons are a welcomed predation to limit pigeon proliferation.

Early American avian history of proliferation also goes back to the tragic tale of extinction of the native passenger pigeon. It was perceived in unlimited abundance by John James Audubon, who described flocks that stretched for miles, passing overhead in the sky. He estimated that such a flock contained over a billion birds. We had to later learn a hard lesson of the ultimate environmental peril of perceived over abundance.

Replacement reproduction of such large numbers is usually a slower recovery process by comparison, especially for the pigeon. A nesting pair is limited to two eggs at a time, and chicks raised slowly are painstakingly fed by parents with a regurgitated white fluid mixture of grain and water known as “pigeon milk,” as in my illustration.

Rock dove squabs (common pigeons under 4 weeks old) have historically been raised for many human purposes, particularly as carrier pigeons with a heroic purpose in wartime. It was possible to relay a written message on light paper inserted into a small tube tied to one leg.

Early Romans are said to have sent reports of Caesar’s conquest of Gaul back to Rome via pigeon, and news of Napoleon’s defeat at Waterloo back to England as well. In the two World Wars, carriers on the frontlines were decorated with the English Dickin medal, the highest honor given to an animal in service during wartime, and the French Croix de guerre for saving human lives with their homing instincts. They also played a vital role in the in the invasion of Normandy as radio messages were apt to be intercepted by the enemy.

How this life saving homing instinct is inherent in their brains is explained in recent National Geodetic research. It discovered pigeons could detect low frequency infrasound waves from magnetic earth fields with the help of iron particles above their bills. It was an instinct known as “olfactory navigation.” This confirms that wild creatures often have different, and some superior, abilities to humans.

White pigeons are still used in dove-releasing ceremonies at weddings, funerals, and some sporting events. This pigeon species has had a historic diversity since almost day one with the Biblical tale of a dove homing to Noah’s arc with a laurel branch in its mouth. It conveyed symbolic promise of earthly recovery of dry land for all creatures. This symbol of promise and hope still lives on for us to this very day. May it have a meaning that the cycle planetary momentum of Earth may be able to recover from global warming with our help. 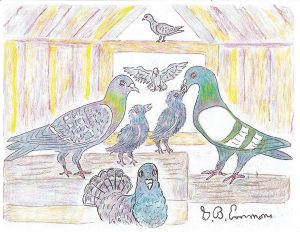