You are here: Home » Features » The Neighborhood Fox

Frequent reports of red foxes in urban neighborhoods as well as inner cities are examples of a trend of wildlife living in comfortable contact with human beings. It is happening everywhere as a growing wildlife frontier moves back in to reclaim habitat previously over-populated by people. There are rough edges along the way because subsequent intentional feeding of wild creatures can be detrimental to the independence of their survival instincts.

The wily red fox is the largest and most widespread of all foxes and is perhaps the most unlikely to fit this picture of coexistence. However, they have adapted to hanging out around here to catch rabbits, rodents, and odd bits of garbage they can scrounge. I have even seen them on back porches waiting for a free handout from a wildlife-friendly neighbor, as in my illustration.

As a member of the order of the species Canis, which includes the smaller gray fox also native to our area, the fox seems more cat-like than dog in many ways. Males are sometimes called ‘dogs’ while the females are referred to as ‘vixens,’ and the offspring identified as ‘kits’ instead of pups.

When stalking their prey like a feline, they may crouch along the ground and, using cat-like claws on their feet for gripping, they have a habit of perhaps climbing up a leaning tree for an elevated lookout of the surroundings. Their long, slender, powerful legs are for running at speeds of up to 30 miles per hour or standing on their hind legs before leaping in an arc and pouncing on an unsuspecting rodent.

The long, bushy tail is often referred to as a ‘brush’ carried behind like a rudder on a ship to maintain balance and direction of movement. The white tip of the tail was explained in Native American mythology as a gift from the Great Spirit to drag behind it in the snow to erase tell-tale tracks from would-be predators. In French mythology, the fox was crowned with the clever royal title of ‘Reynard’ for being able to outwit any and all worldly challenges thrown his way.

Family life begins with mating in winter as the male scent glands activate in a skunk-like odor quite noticeable when one passes by your house on a damp night.

There are usually four or five kits in a spring litter in a subterranean den, which could be an expansion of an abandoned woodchuck hole as I have once witnessed. There, a vixen with kits in a spring litter made their home under the foundation of a friend’s toolshed. The animated antics and exploits like a three-ring circus provided daily entertainment out their kitchen window.

But then one night the mother was hit and killed by a car in front of their house on Sconticut Neck Road in Fairhaven. In the true spirit of wildlife support, my friend called Fairhaven Animal Control and they came to gather up the orphans to take them somewhere for further care.

But several kits that were not seen were left behind, and when noticed, they were fed and watered daily by my friend and his family. Both survive to this very day and grew up as familiar wildlife characters of the neighborhood, and their families can be heard calling at night. It comes through loud and clear as a sharp rasping bark, not without a nostalgic tenor of meaningful family communication. Perhaps it is a comforting tribute to the human role in transition in one small frontier of intelligent environmental awareness and co-existence. 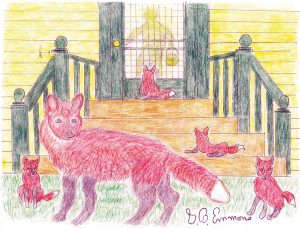