You are here: Home » Features » The Native Cranberry

The cranberry is a native wetland fruit that was used here by local first Americans to cure their meat – known as pemmican – to preserve it for purposes of future sustenance during the winter.

The name ‘cranberry’ came from Dutch and German settlers calling it ‘crane berry’ because of the pink petals of blossoms that bloom in the spring and twist back resembling the head of a crane. They are illustrated by the five upright stems at the bottom of my drawing.

This likeness is possibly derived from the figure of a crane in their old world mythology as an ethereal symbol of earthly renewal in spring. The name was later shortened to cranberry.

The vines of the plant between the blossoms, also in my drawing, thrive on trailing vines like those of a strawberry on a special combination of soils and water properties in beds layered with sand, peat, and gravel, known as bogs. They act as nature’s sponges to store and purify water and help maintain the water table.

Some of the bogs we see driving by in our travels actually evolved from deposits left by glaciers more than 10,000 years ago. These are known as impermeable kettle holes lined with clay that prevents materials from leaching into the groundwater.

In their movement, glaciers scraped up rocks and other organic materials that, when they melted, left behind heavy formations of molten metals on top of the clay. Some were islands of iron which had to be removed but could be melted down for making tools or other implements. This left a fertile combination of soils and water properties layered in beds.

Years ago on Cape Cod, growers noted that sand blown in from nearby dunes helped the vines grow faster by controlling weeds and insects. Today, many growers spread an inch or two of sand every three years. Healthy vines may survive almost indefinitely, some a hundred years or more.

The autumn harvest began in mid-September by flooding the bogs with water so the berries float to the surface to be scooped up by mechanized moving machines. When finished, the water can be re-cycled to other bogs with a purifying effect. New bogs are shaped in more rectangular dimensions of straight lines for efficient routing of harvesters.

In Southern Massachusetts there are some 14,000 acres of bogs, which are workplaces of nearly 400 families, many going back as occupations of several or more generations to colonial origins.

They have nurtured and cultured their wetlands while contributing to their communities and providing habitat and shelter for hundreds of plants and species. So doing, they preserve and beautify nearly 63,000 acres of New England countryside.

Now the harvest is all but complete, just in time to provide fresh fruit for the ceremonial holidays as we give thanks for all the blessings of a bountiful harvest as well as the economic and environmental benefits of a local industry. 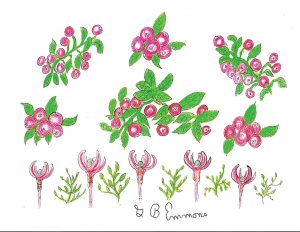