You are here: Home » Features » The Mythical Mute Swan

The mute swan that adorns our shorelines with its large, snowy white silhouette, gracefully gliding upon the open waters along the icy edges of our waterfronts is easily identified and makes a lasting impression. It bears the nomenclature of ‘mute’ by being primarily less vocal than its west coast cousin the trumpeter swan and its bugling, or the European clamorous whooping swan.

The mute swan also looks quite different with a pronounced bright orange bill bordered by an obtuse black knob on the top of the beak. As illustrated, the prominent knob is larger in males and visibly pumps up even larger during the coming breeding season.

This swan is classified as Cygnus olor, and is not native to this continent. It was first imported from Eurasia to Elizabethan England for food, and like the European roe deer, was registered as property of the Crown and subsequently protected as a royal bird. Today it seems to still bear regent sounding British titles, such as “cob” for males, “pens” for females, “cygnets” for young, “bevy” for flocks, and “wedges” for flights.

The mute swan was introduced to North America in the 19th Century. The purpose was primarily to decorate public waters – ponds, lakes, waterside resorts, and zoos, especially to give them the aura of an old world ambiance.

Shakespeare himself frequently featured this bird in his writing and was given the epithet “Sweet Swan of Avon.” He remarked that, although it was mute, it sang its swan song when ready to die. In act 8 of his play Othello, she was remorse to similarly remark, “I will play the swan and die in music. “ In Romeo and Juliet, he personified their romantic love to be as pristine and symbolic as that of a swan. In 1843, Hans Christian Anderson had written his immortal folklore, The Ugly Duckling, about a cygnet that is implanted as an egg and hatches out from a duck’s nest. It is soon tormented as ugly by ducklings until it developed into an image superior to them as a graceful and beautiful creature. Now, however, in modern times, the once considered pristine swan has regressed to ornery and aggressive, and to be classified as invasive.

From fossils dating back 6,000 years, the swan has, like other birds, evolved along the Darwinian theory of “survival of the fittest,” to protect its nesting site and habitat territory. And in feeding to flourish it has learned to tip up and reach down with its long neck further than other waterfowl. It can eat up to eight pounds a day of submerged aquatic vegetation faster than it can be regrown. And it is locally known to turn suddenly aggressive towards dogs and humans, hissing with threatening, powerful wing beat jabs that can be frightening and damaging.

These words I share with you were inspired during our Christmas gathering of a small family group of three generations at our Little Bay shoreline home. We looked out a picture window to be surprised at a pair of mute swans gracefully swimming by. This sudden appearance to devoted bird watchers almost seemed to portent a blessing upon the occasion. Coming to mind was the Christmas carol The Twelve Days of Christmaswhere my true love gave to me “seven swans a swimming.” It seemed perhaps to be an uncanny blessing, at this place, on this particular day. 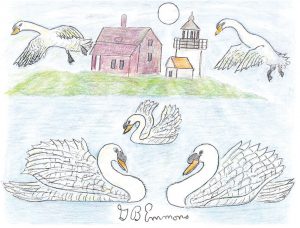