You are here: Home » Features » The Mysterious Life of William Dexter

During the late nineteenth and early twentieth centuries, the Tri Town had its share of individuals living in seclusion in shacks along the water or in cabins in the woods. These “hermits” as they were usually referred to were often the source of gossip by the local community. But they were also beloved and considered part of the community.

In 1923, William Dexter lived in a small cabin on Randall Road, then known as the “lonely east section” of Mattapoisett. No one had set foot in the cabin since 1892 when William’s mother, Hulda passed away. William was different than some of the other local hermits because he was rumored to have had a large fortune. The gossip in the village at the time placed his value at about $25,000 to $50,000. William would not say how much money he had but he admitted to investing $10,000 in Liberty Bonds during World War I. He was also in the process of waiting for the estate of the late Mary Jane Randall to be settled, in which she left him $12,000. His relationship to Mary Jane is not clear. However, she may have been a family relation as his mother’s maiden name was Randall.

Despite William’s rumored wealth, he worked year round by shell fishing. He would often be seen in the winter along the waterfront “tonging” for oysters. He fed himself this way and offered to work shell fishing or doing odd jobs for ten cents an hour and “dinner thrown in.”

William was born in 1850 to Harvey and Hulda Randall Dexter. Harvey and Hulda married in April of 1848. This may have been Harvey’s second marriage. The 1850 US census lists three additional sons of Harvey: 21-year old Charles, 15-year old Andrew and 12-year old Fremon.

Sometime between 1855 and 1860 Harvey passed away and Hulda worked as a seamstress to support William and herself. In September of 1864, Hulda married William Robinson Cushing, a local shipbuilder. At some point after his mother’s marriage to Cushing, William left home. He may have relocated to Taunton. Marriage records indicate that William was married in Taunton in 1876, twice. In August of that year he married Josephine Andrews Mortimer. And then in October he married Louise Ridlon. The circumstances of these marriages are not known. His wives may have died or there may have been other personal issues that led to the end of the marriages. By 1880 he returned home to his mother and lived with her and her husband.

William worked as a marble cutter until the early 1900s. By 1910 he was self-employed, working the odd jobs and living alone. Rumors of his wealth had spread and in 1923 he received a death threat. He received a letter marked with a skull and cross bones instructing him to leave $500 cash in a hole at the head of “a lane near Randall Road”. If he failed to do so the “Dread Visitor” would come to his house at midnight to kill him.

The letter was signed the “Blinking Buzzards K.K.K.”. The Ku Klux Klan was experiencing resurgence in the 1920s and was active in Worcester around this time.

The name Blinking Buzzards is a little more mysterious. It may have been in reference to the 1921 Buster Keaton film, The High Sign. The film was a comedy in which Keaton played the role of a man that gets a job at a shooting gallery at an amusement park. He fools a gang known as the Blinking Buzzards into thinking he is an expert marksman. The gang hires him to kill a man named August Nicklenurser, “the town miser”, who was “tight as a fourteen collar on a sixteen neck”.  In the film, Mr. Nicklenurser receives a letter from the Blinking Buzzards threating to kill him if he did not give them money. The film ends in a comical chase through a house filled with secret passages.

The reference to the Klan in the letter may have been added to sound more menacing but William was not taking any chances that things were going to end up like a hilarious silent film. Despite the letter warning him not to tell anyone about the threat, he reported the letter to the town. Several constables were dispatched to guard him. Although William kept his money in New Bedford banks, he had his cabin door secured with planks and his windows nailed shut and blinds drawn.

It is not known how the events played out, but it is unlikely that the villainous gang collected on its threat. William died three years later. He was laid to rest in Pine Island Cemetery in a grave he shares with his mother.

The 20-minute silent film, The High Sign can be viewed at the Internet Archive website at http://archive.org/details/TheHighSign. 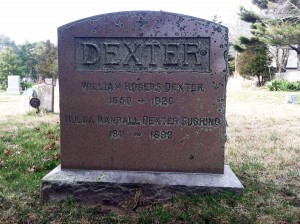 One Response to “The Mysterious Life of William Dexter”