You are here: Home » Features » The Mattapoisett Purse

What makes a small woven basket worth thousands of dollars?

Anyone who has ever watched Antiques Roadshow might quickly answer “the age of the piece.” But in the case of a small handcrafted basket from Mattapoisett, the answer would be “time, intricacy, uniqueness, and beauty.”

Gladys Ellis was a well-known Mattapoisett artisan who worked in the medium of pine needles, raffia, and ivory. Ellis not only perfected the making of Nantucket baskets, which have a very long history dating back to the 1800s, she also invented a newer style so painstakingly involved they would take months, if not years to complete. She called her creation the Mattapoisett purse.

For decades, Ellis held classes in her home at 87 North Street. Pat Goss of Mattapoisett said, “She was a great teacher, a great lady.” Goss described Ellis as a perfectionist who guided her students towards their own level of perfection.

Primarily self-taught, Ellis worked tirelessly on her craft and became the teacher many students wished to study under. There was always a waiting list of eager women.

“She always had a full class,” said Bonnie Silverstein of Dartmouth and Maine. “I got on a waiting list, and when one of her summer students left for the winter, I took her place.” When winter ended, Silverstein lamented at having to leave so the summer student could return.

“I studied with her, oh golly, for probably fifteen or twenty years,” said Nancy Snigger of Freetown. She learned about Ellis’ classes from a craft supplier. Snigger wrote to Ellis and was subsequently admitted to the class. “There were lots of girls she was teaching,” Snigger said, adding that many became lifelong students of the art of basket making.

Ellis would become widely acclaimed for the Mattapoisett purses she designed and created. The process was long and very precise, her former students all attested. Using the long nettles of southern pine trees coiled with raffia, the process included wrapping raffia tightly around a metal form to create lace-like exterior detailing. These decorative elements gave the purses a complexity not included in any other style of basket making. Add to this an oval of ivory expertly carved using scrimshaw techniques affixed to the clamshell hinged top, and you begin to appreciate what Ellis was doing: making masterpieces.

An admirer of Ellis’ work and also a basket maker, Melissa Abbot of Gloucester Woman Baskets and Supplies wrote, “My friend told me her mother had given her a basket she made … her mother had been a student of Gladys Ellis … it was called a Mattapoisett purse … it was as hard as wood and as light as a feather.…”

Rochester resident Elise Coyne said, “I had to wait two years to get into Gladys’ class.” The Mattapoisett purse she created in 1984 while studying with Ellis is used for special occasions only, she said. Coyne did her own scrimshaw design on the oval insert, a picture of the Bird Island lighthouse, a magnificent rendering done freehand. “It’s not perfect, but it’s me,” she said. Ellis advised Coyne at the time to insure the piece for $1,000.

Mattapoisett resident Lois Ennis is one of Ellis’ many family members living in the area. Ennis said of her aunt, “There wasn’t anything she couldn’t put her hand to.” She said Ellis also taught at universities. “She held classes just for family because you couldn’t get into her class otherwise,” Ennis shared. Of her many talents, Ennis said, Ellis was also a self-taught seamstress.

Another student, Roxanne Bungert of Mattapoisett, said she studied with Ellis during the ‘80s until Ellis’ passing in 2011. Bungert said she once asked Ellis, “How does it feel to be a legend in your own time?” after several media outlets published stories about her Mattapoisett purses. “She just smiled; she was humble,” Bungert said. Bungert described Ellis as very patient. “She’d lead you every step of the way.”

Silverstein knew that the Boston Museum of Fine Arts had acquired one of Ellis’ baskets for their collection, paying a rumored $35,000. When asked about that sum, she responded, “I’m not surprised at all…. Some of those baskets took years to complete, and she did all her own scrimshaw too,” she said.

Silverstein reported that it was her brother-in-law who had commissioned the purse now at the MFA. “It was a gift to his wife,” she said. When Silverstein’s wife passed away, his daughter, Suzanne Wise, inherited the purse.

Calls to the MFA to confirm the basket’s value of $35,000 went unreturned.

Ellis’ energy and creativity, keen eye for detail, and artistic talent are memories shared by dozens of women in the area. Now one of her masterpieces will be forever preserved at the MFA.

“She knew they were valuable,” Coyne said, adding, “She was quite proud of them.”

Ellis passed away on January 9, 2011 at the age of 94. Born in New Bedford, she lived her entire life in Mattapoisett. 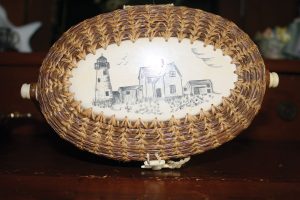