The great blue heron is probably the most majestic figurehead of shore birds, easily recognized and identified by bird watchers along the coastline of Buzzards Bay. It is usually sighted while standing or wading in the shallows of the water’s edge of the coastline shore. It may appear almost motionless while cautiously leaning over the water, moving guardedly, step-by-step, with a poised position of purposeful predatory intent. It looks obsessed with an aura of complete patience, intently searching for and seeking a watery prey.

The shape of the profile is a curved S-shaped serpentine figurine with neck and beak drawn back like a snake ready to strike. Then, the sudden sighting springs the barbed beak like a hair trigger, springing lethal intent. The heron can then close its air intake valve on its bill while under water to spear, skewer, and scoop up to swallow a slippery fish, all in one motion.

The latest North American Breeding bird survey estimates a continental population of 83,000 breeding birds that can be found almost all over America. A simultaneous replenishment of a beaver population has been beneficial for the heron. Their dams have increased both fresh and saltwater side habitat with a patchwork of small ponds and swamps well suited for inland foraging.

The heron can then also hunt by day or night due to a high percentage of photoreceptors in their eyes for vision in the dark. This greatly diversifies the scope and potential prey of predation to include frogs, salamanders, insects, rodents, and even smaller birds.

The great blue heron may be seen all seasons long, but it also migrates somewhat seasonally. It moves somewhat south in winter and then north in summer. In spring, they nest in colonies for the breeding season here.

There are often more than one pair sharing the same tree, but they build each nest progressively higher than the previous one, as in my illustration. The male is first to select or return to a nesting site and collects much of the nest material. Then, to attract a passing female, he flies in circles above the colony until he attracts a suitor, which may not be the same one as the year before. He performs his elaborate courtship display by erecting his regal head plumes. Once with a partner, they both loudly clack their bills together in mutual figurative avian conversation.

As a national symbol of a healthy watershed environment, the heron is for many of us almost as elite as the osprey or the bald eagle. The official Audubon Latin bird classification is Ardea herodias, appropriate for this majestic seaside figurehead of our shoreline. The Native American Algonquin word for the great blue heron means “spirit of the waters.” This primitive supernatural spirit connotation seems to capture our own intangible feeling of a kindred humane connection to animated figures of the Earth. We might even, as the Native Americans did, elevate almost all other living things as sacred. 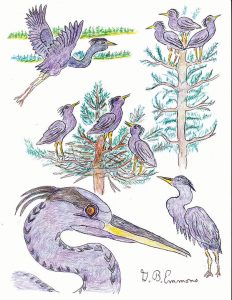