You are here: Home » Features » The Bay Flows Gratitude

On May 21 at Shining Tides at Camp Massasoit, the Buzzards Bay Coalition proudly announced the completion of the Nasketucket Bay Land Conservation Project. This is the largest land conservation project completed, which covers and protects 416 acres of a variety of habitat and coastal areas.

In addition, the BBC has continued to be successful in supporting the Massachusetts Oil Spill Prevention Act passed (MOSPRA) in 2004. Although this is an annual effort in the federal courts, the BBC aims to keep this law in place to positively ensure the protection of the coastal area.

Prior to the awards ceremony, BBC members, volunteers, and the public gathered in a social hour, which allowed time for the BBC to display their many upcoming volunteer events and their new beer that will be sold locally.

The first award presented this evening from the Buzzards Bay Coalition went to two extraordinary volunteers for their outstanding dedication, Jean and Tally Garfield.

Although Jean was unable to attend due to other volunteer service work in which she was participating, her granddaughter Cali Tetreault accepted the award on her behalf as she was credited for leading the coalition for New Bedford.

The Guardian Awards are the highest honor the BBC presents for “outstanding service or education advocacy to an unsung hero who inspires others to make a difference.”

The first BBC Guardian Award was presented to Assistant Attorneys General Seth Scofield and Pierce Cray for a decade of defense of MOSPRA and determination to continue to keep this law intact.

The next BBC Guardian Award went to Paul Niedzwiecki, executive director of the Cape Cod Commission, for his outstanding leadership in producing the Cape Cod 208 Water Quality Plan. Thanks to all of Niedzwiecki’s efforts, there is a clear path for addressing the Cape’s nitrogen pollution crisis and continuing preservation of the treasured area.

Another BBC Guardian Award was given to Jennifer Howard, the director of Land Protection at the Massachusetts Department of Conservation and Recreation. Howard received the BBC Guardian Award for her leadership on behalf of the Commonwealth and support of the completion of the Nasketucket Bay Land Conservation Project, which essentially doubled the size of the Nasketucket Bay State Reservation.

The final BBC Guardian Award was presented to Dr. Joseph Costa, the executive director of the Buzzards Bay National Estuary Program for his lifetime dedication to the Buzzards Bay Coalition.

Dr. Costa, from New Bedford, participated with SeaLab and earned his Ph.D. at Boston University where he researched water quality with a focus on nitrogen issues at Woods Hole. Dr. Costa also helped raise money to help search for solutions for the Buzzards Bay Watershed and helped start the Baywatchers water quality monitoring program.

With future plans to start a research database involving his research with the Buzzards Bay Coalition, Dr. Costa has dedicated a plethora of hours in service to help protect and study water and wildlife.

As stated, “The bay flows in Joe’s veins and we love him for that.”

For more information about the Buzzards Coalition and volunteer opportunities, visit www.savebuzzardsbay.org. 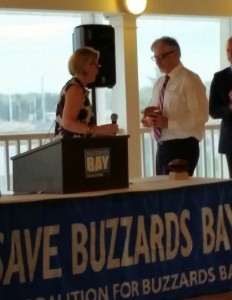