You are here: Home » Features » Thank You, Mim Morse

Now that school has begun, busy schedules return for households across the Tri-Town region. Parents become taxi drivers blazing trails through well-worn roadways like North Street, Converse Road, and Mary’s Pond, while students struggle to learn time management in an effort to accommodate homework and extracurricular activities. Parents and kids alike feel as if hours are compressed so that one hour is reduced with only 30 minutes of productive time. Oh, for simpler days with 60-minute hours.

As our communication devices have evolved from telephones attached to walls to handheld devices; as adding machines have been replaced with software programs, everything seems to have sped up. My generation would never have imagined a time when telephones would be wireless, while also being able to take photographs; the Internet, the stuff of science fiction. As my contemporaries and I were sitting in stifling pre-WWII architectural structures whose asbestos laden walls crumbled at our feet, somewhere in California a quiet boy was trying to get through school without being noticed. None of us could have predicted the impact on the world that Steve Jobs would have, including him. But I’ve jumped too far ahead of myself.

High school in the Sixties had a pace set to a slow Motown tune like Smokey Robinson would sing, or the Beatles simply wanting to hold her hand. No fast rapper-dapper-do brain-numbing stuff for us, even heavy metal hadn’t been created yet. Time was slower and I think in some ways better. But you’ll be the judge of that.

When I was in high school, most of the teachers were fearsome creatures. And then there was Miss Evelyn Morse. She was the business education teacher. She wasn’t called a “business educator” back in those days. Her handle was the “Typing Teacher.”

As an average (at best) business track student, the courses I took were bookkeeping (22 column accounting paper was used; we actually wrote numbers in pencil), shorthand (making funny marks that stand for letters and phrases written on paper in pen), and typing (manual typewriters, the kind now only seen on Antiques Road Show). Two years for each of these specialized skill-training courses with a C grade average and you would be good to go out into the world to earn a living.

Students being educated to become the leaders of industry and commerce, politics and medicine, would naturally take the college tracks. For the students who simply wanted to graduate from high school, there were the general education courses. Lastly, there were the guys who took shop (just guys, no gals). Taking industrial arts or “shop” like automotive and electrical training wasn’t viewed as cool back then. Most of us thought those boys would go from high school to jail, or possibly worse the gas station on Main Street. Little did we know that those fellows would become the expert tradesmen we’d gladly pay thousands of dollars to for fixing our cars, heating systems, and wiring our homes. Want to make money, kids? Become a plumber!

College, as far as my crew was concerned, was something other kids thought about, not us. We wanted to become secretaries working for John Hancock Life Insurance in Boston, or a bookkeeper for the local doctor. Our goal was employment right away, not higher education. Our typing, filing, and shorthand skills would mean we could dress in skirts and blouses and have clean hands at the end of the day. Our parents, for the most part, also held the notion that college was for other people, people from another tier of society. By going to work right away, we’d be bringing extra money into our parents’ homes. For many of us, that was critical.

I am pleased that today all kids are told they can and should go to college or some additional educational placement after high school. They are mentored to become something, achieve something, if they want to, if they try. It if further gratifying to see that the trades are finally respected and viewed as an opportunity, not a dumping ground for the non-bookish types. I’m also glad I learned to type.

Back to Evelyn Morse; we called her Mim Morse. As adolescent teenage girls (there wasn’t a single male in our classes – not even in bookkeeping) our goal was to giggle a lot, make each other giggle a lot, try to get through our classes without getting in trouble and maybe, just maybe become proficient enough in typing to leave high school and get a job.

Miss Morse’s name lent itself easily to being humorously modified. All the teachers were either given nicknames or secretly had their names changed to suit our perception of their personalities or their questionable hygiene practices. In her case we did like her better than some of the other cast of characters into whose care we were cloistered for educational activities, so we simply altered MISS to MIM.

Most of our teachers had been working in their chosen academic field for decades and were nearing retirement. They’d sometimes get a far away look in their eye that we’d mistake for senility. I now know they were daydreaming about a time when they wouldn’t have to face a bunch of teenage hot shots whose ideas of what life was all about included aspirations of becoming an office clerk. But Mim Morse was always cognitively present with us and earnestly whittling away at our teenage crust so we could learn a marketable skill.

She taught us how to sit properly in our chairs so that the muscle fatigue we would experience from hours of typing wouldn’t hurt quite so badly. She impressed upon us the absolute importance of learning the “home row” of the typewriter and the correct pressure to apply to the keys. The finer points of triple carbon paper corrections were instructed so that we were nearly fine art conservationists as we very carefully erased away an errant letter. Who can forget the exacting techniques of removing your documents from the typewriter’s roller and then reinserting them to line up the sentences and individual letters to perfection. These were bona fide saleable talents, I tell you. If you could master the operation of a manual typewriter, you were ready to enter the real business world and ascend to the top of the Empire State Building! Nothing was beyond our grasp.

Mim Morse also taught shorthand and 10-key adding machine. I found shorthand fun until I reached the aforementioned real world. My first boss thought dictating a letter to a newly minted secretary was a form of entertainment. His normal manner of speaking was rather slow, clear, and direct. None of those articulation capabilities were present when he dictated to me. He started out clearly enough, but then degrade into Mr. Mumbles; “Dear Mr. Smith, pursuit to the transaction weheretoforediscussedonseptember27thpleasebeadvisedthathumabubbawhocolazen … DID YOU GET THAT?”

Suffice to say I found other employment as soon as possible to avoid the embarrassment of being fired from my very first job.

During those first few years out among the grownups in the working world of office gossips, lunch breaks at my desk and bathroom breaks not quite long enough to smoke a cigarette, I often thought of Mim Morse. Her calm voice would cut through the miasma around me and lead me towards the light. Her no nonsense but kind approach to teaching the skills she knew would, at the very least, give us non-college material clowns a fighting chance to support ourselves had been taken for granted. Now it sustained me.

As the years have gone by, when my thoughts wander back to high school, Mim Morse is the first person to come to mind. A woman whose life probably hadn’t been all she had dreamed of. She was smart. Maybe she had wanted to be a lawyer or college professor or ballerina. Whatever she might have wanted to be and never was didn’t stop her from pouring into her students the best she had to give. Whether we had the natural talent to excel or the adolescent emotional stability to take what she was offering was beyond her control. She knew that. Yet each day she plugged on, building on the previous days and weeks of training until she had nothing left to give. She treated us like people worth investing her time in even if we didn’t have a clue who we were or where we were going. That’s what good teachers do. Our Mim Morse was a good teacher.

I tried to find out what had become of Miss Morse but it has been too many years. I believe she was born in 1908 and died sometime in her 9th decade. I hope she knew some happiness outside the classroom. I hope when she retired she felt that she had been a success because I, for one, credit her with being the most important teacher I ever had.

I wish I could thank her. I’d like her to know that the useful skills she taught me were stepping stones I used to build a successful career. I’m certain she’d smile upon discovering that after 45 years of practicing my typing skills I can now do so at 70 words per minute. I’m pretty sure she’d be proud. 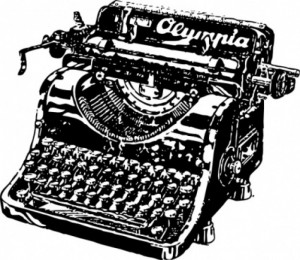