You are here: Home » Features » Talking Trash (and Recyclables)

If you have been wondering when the new mechanical trash and recycling system will finally be implemented in Mattapoisett, you are not alone.

The Wanderer first reported in March 2014 that Mattapoisett would be adopting the new system, pending contract negotiations and Town Meeting appropriations of funding to kick-start the new program. Since that article was published, the article to fund the new program passed during the Annual Town Meeting, and back in May the Town signed a contract with ABC Disposal to adopt the new system, which other towns in the region – including Rochester and Fairhaven – have also done.

In March, The Wanderer reported that the new trash and recycling system would start in July of 2014, pending the appropriation of funds and a contractual agreement. Residents can now expect the system to begin sometime earlier in 2015.

“It’s the equipment,” said ABC Disposal Operations Manager Jerry Dugan during a September 22 phone interview. The trucks have been ordered – a half dozen that will service Mattapoisett and several area towns including Rochester and Fairhaven – but Dugan said he could not order the trucks until agreements were reached with the towns and contracts signed.

Board of Health Agent Dale Barrows said during a September 22 phone interview the Town has nothing to with the logistics of when the new system will start or how and when residents will be notified. He said the delay is with ABC Disposal, and the length of time between ordering the new trucks and receiving them is about six months, according to Barrows.

There was some delay in the process, said Dugan, but the trucks have been ordered and Dugan said he is still waiting on a delivery date from the manufacturer.

“These trucks are specially made,” said Dugan, adding that the trucks cost about $400,000 a piece. “You can’t just go to the dealership and pick them up.”

Dugan stated that residents will be informed about the new trash system once the company acquires the new trucks, weeks before the Town makes the switch to the new system.

Residents will receive the information in the mail about the new system and about distribution of the new trash and recyclables receptacles ABC Disposal will deliver to every household in town.

“They’ll (residents) be well informed beforehand,” said Dugan. “They won’t just be delivered trash bins without knowing what they’re for.”

The new ABC Disposal Inc. mechanical pick-up trucks are the latest in waste management technology in whicha specially-designed garbage truck uses a mechanical arm that picks up the trash bins and dumps the contents into the back of the truck.

Each residence will be given two new large plastic receptacles – one blue 65-gallon bin for trash and one black 95-gallon bin for recyclables – designed specifically to be lifted by the mechanical arm.

The wheeled bins are equipped with a hinged lid that is attached to the bin and lifts up for easy loading and unloading by the truck. Every bin will be provided with a barcode identifying that particular bin with its designated address in case of loss or theft.

Pickup schedule will remain the same, continuing with a biweekly recycle pickup.

In the meantime, until residents are officially informed in the coming months about the new trash and recycling system, Barrows asks residents to kindly direct all questions to ABC Disposal. 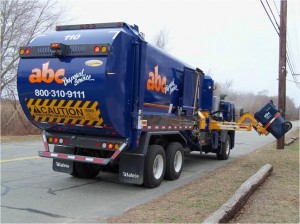