You are here: Home » Features » Tabor Teacher’s Journey Through Vietnam

He wasn’t sure what to expect when he got there. As a history teacher at Tabor Academy, Gary Sousa knows the history between the U.S. and Vietnam – as most of us do. But Gary is a historian, a traveler, photographer, and among other things, a diver, and he always wanted to visit Vietnam.

Sousa embarked on an informal study tour in 2007 with some fellow teachers from New England, and spent several weeks following Vietnam’s beaten path, its unbeaten path, and looking for the historical remnants along the way — while keeping his photographer’s eye open for something extraordinary to capture with his camera lens.

On April 15 at the Taber Library in Marion, Sousa shared his experience traveling through Vietnam with a few Marion residents, offering a lot of insight, humor, and artistic treasures to those who defied the wind and driving rain to come and listen.

“I enjoy photography,” said Sousa. “I almost only take photos when I’m on trips.” He went from Hanoi, up north to Sa Pa and acquainted himself with the Hmong of the mountains. He traveled south, to Hué, Ho Chi Minh City, and into Cambodia, too. He could have gone on all night with his seemingly hundreds of photos and fascinating tales of his encounters with Southeast Asian culture, but Sousa managed to restrain himself.

“I’m more of a modern historian than an ancient historian,” he said. He had already traveled to China, Japan, and Korea. “I’ve done the old ancient history stuff.”

Sousa, born in 1969, having grown up in “the shadow of the Vietnam War,” as he put it. The Vietnamese recall it as the American War.

“What are they going to think?” Sousa thought to himself about his arrival in Vietnam. “Am I gonna get spit on?” To his relief he found that, as an American, “you sort of get a free pass.” The Vietnamese, said Sousa, hate the French who colonized Vietnam long before the Americans came around. He wasn’t at all the “American pig” he was afraid of being called.

“I was not at all made to feel bad that I was an American,” said Sousa — to his relief.

Sousa started in Hanoi, visiting the touristy spots like the water puppets, likening the significance of visiting the place as “sort of like going to Plymouth Rock.” Hanoi, he said, is marked with cobblestone streets, countless people, and bursting with storefronts.

Sousa faced a little of the discomfort of anti-American propaganda while visiting the “Hanoi Hilton,” a prison where American prisoners of war were contained, including Senator John McCain. It is now a museum of the Vietnam War era, but even more so, a museum of the French colonialism era when the prison walls once witnessed the brutality of the French and the torture of the Vietnamese.

Throughout the museum, Sousa came across some unfavorable phrases such as “American aggressors and their puppets,” which is not what average Americans consider themselves. As Sousa pointed out, Americans tend to perceive themselves as the good guy, spreading good things around the world, like freedom and democracy.

Sousa encountered some significant cultural disparities throughout his travels as he headed south, visiting sites along the way and interacting with the people. He visited what he called a “crafts compound” where developmentally disabled people lived and worked making handicrafts and artwork, which was sold onsite. He said, although it might not be considered so to the Vietnamese, Sousa compared the place to some form of a sweatshop.

“We felt uncomfortable about it,” said Sousa. He thought it looked like a labor camp, but pointed out that in a socialist society, perhaps it is viewed as though “everyone’s got a job, everyone contributes.”

Perhaps one of the most disheartening moments of the trip was when Sousa and his group missed their train headed north to Sa Pa. That night they were packed into a small bus so tightly, that the only way for them all to fit was if someone lay flat on the floor beneath the seats during the sometimes terrifying ride, which Sousa volunteered to do.

“I don’t know how we got there alive,” said Sousa.

But the highlands of Sa Pa were beautiful, and Sousa spent time with the Red Hmong of the region, a people Sousa described as “lovely, fun, and friendly,” inviting him into their homes and allowing him to take their photo.

He photographed people boiling indigo, one of the main exports of the area, and dying fabric in large cauldrons brimming with blue liquid. “It doesn’t smell very good,” said Sousa.

Sousa explained what it is like to be a “responsible tourist,” being mindful of your impact on a small indigenous village possessing very little western resources.

“You are a walking gold mine,” said Sousa. “You could change the life of a village just by throwing out a couple of twenty-dollar bills.” Quite possibly, noted Sousa, to the detriment of that village’s social order.

Sousa said he takes pleasure in photographing “the things you never see,” but surely notice while wandering about Vietnam. Like two kegs of beer balancing on the back of a motorbike. Or another motorbike driving by with a bathtub strapped to the back of it.

“I took off after that,” said Sousa, intent of getting a photo of the bathtub. He also captured a photo of a pig hogtied to the back of a motorbike.

Making his way south, Sousa stopped in Hué, the ancient capital of Vietnam, visited the Citadel, took lessons on how to cook Vietnamese cuisine, and went scuba diving.

“I’m one of the only people I know who dove Vietnam.”

Sousa concluded his Vietnam portion of the trip in Ho Chi Minh City before jumping over to Cambodia, a story for another day. He found, however, that in many places, signs still hung with the city’s former name, Saigon. He noticed many Vietnamese still called the city Saigon, and used Ho Chi Minh City interchangeably.

“It hasn’t quite caught on yet,” said Sousa about the Vietnamese people’s take on the name change.

Saigon was “very very busy,” and “vehicles rule the world.” He said he learned how to cross the street while visiting the city. His description of the process was comical, to say the least.

“You just step out, like Moses parting the Red Sea,” he said, and he described the oncoming traffic as “a wall coming at you.”

“As long as you keep moving forward,” and keep eye contact with the drivers on scooters and motorbikes, “you are safe.” You do not stop, and you definitely do not back up. “That’s how you do it,” said Sousa. “It was a rush.”

He went to the Presidential Palace, which he said was “like looking at the Brady Bunch house – everything’s from the Fifties and Sixties.”

He found out the War Memorial Museum was really established for American tourists. He said, to the Vietnamese, the war with America was not really a big deal. It was just one blip in the tumultuous history of the country. “I didn’t see too many Vietnamese in the museum.”

As Sousa’s trip wound down, he snapped a photo of one of his last nights, a shot of his place setting at a table near the street, a moment in time when Sousa just sat, reflecting on his trip, a moment Sousa called peaceful.

“Wow,” Sousa thought to himself. “This is a beautiful, beautiful country. “I remember that time,” he said, like an “anchor” that pulls him back to that moment.

“Did you eat the tarantula?” asked a guest at the end of Sousa’s lecture. That was later on in Cambodia, Sousa replied.

“It’s like a hairy potato chip,” said Sousa. “It’s crispy and a little hairy.” Some food for thought to end the evening, someone said. 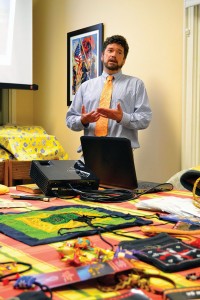