Rhythms, tones and tempos: the elements of music are not necessarily that different than spoken language. And when you put them together, their symbiotic nature is especially apparent – and beautiful.

The Elizabeth Taber Library sponsored a special event on Saturday, March 24 that illustrated the power of merging live music with storytelling.

The audience that benefited was a group of 49 preschool age children (and their parents), who attended the program aptly entitled “Symphony Tales”. These youngsters sat in a semicircle on a rug while a storyteller dramatically recited the popular children’s book Scritch Scratch a Perfect Match that was accompanied by a live, musical performance from New Bedford Symphony Orchestra (NBSO) cellist Shay Rudolph.

“I’ve never seen so many children sit so quietly… There was an emotional aspect of the reading that really came out through the music. It was really wonderful,” said parent Sharon Bartholomew, who attended the event with her five-year old daughter. “The children were mesmerized.”

“It was a fabulous turnout. The children were just in rapt attention with the storytelling and cello playing,” echoed Elizabeth Taber Librarian Rosemary Grey. She said when the children each had an opportunity to play on the cello after the main performance, “they were thrilled.” Also each family received a signed copy of Scritch Scratch from local author Kimberly Marcus, who also participated in the event.

The program was more than just for entertainment value, however, as it was designed to reinforce literacy skills in children.

“Through music, you show the patterns of language. Musical language has the same kind of rhythms, tones, tempos and breaks. Instead of punctuation, it has pauses,” Grey said. During an exercise at the event, children communicated with the instrument itself, which asked questions they could recognize even when not put to words.

“It shows how much music and language can follow the same sets of patterns. There is a new theory emerging in literacy practices, that you can increase literacy by observing and connecting patterns, and the meaning of patterns,” Grey explained.

Indeed, the music at the event was composed by NBSO Director Dr. David MacKenzie to imitate prosodic elements in the text such as stress, pitch and tempo.

“The concept of linking the prosody in text and music is based on current research that shows that the development of music perception skills strongly contribute to the development of linguistic skills, phonemic awareness and phonological memory in young children,” according to a press release describing the event.

“We are taking all of these ways of learning – overlapping and weaving them together to help increase literacy in this population. But it’s really a lot of fun,” said Grey.

For the children themselves, the event was both fun and unforgettable.

“It was wonderful, Ella is still talking about it,” said Sharon Bartholomew of her five-year old daughter, who is now asking for a little musical accompaniment with her bedtime stories. “It was beautiful. I wish we could go to something like this every weekend.”

For more information about “Symphony Tales”, visit the NBSO website at www.nbsymphony.org 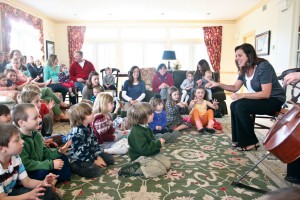