There were a lot of Tri-Town residents still pumping water out of their basements this Monday, after a torrential rain storm on Sunday, March 30 flooded roads and filled cellars faster than sump pumps could do their jobs. The region received over five inches of rainfall on Sunday, and some areas received even more.

Emergency response departments from the three towns reported a significant number of calls for Fire Department assistance in pumping out water from their homes. Residents living near the oceanfront reported flooded streets during the height of the storm Sunday morning when the tide was still high, and several roads were closed to traffic.

Marion Police Chief Lincoln Miller told The Wanderer Monday that the high tide spilled over into Spring Street near Tabor Academy, making it impassable. Marion Police Sergeant Jeff Tripp said other problem areas were on Route 6 by Lockheed Martin where a blocked-up storm drain closed all four lanes. Tripp said one car got stuck in a flooded road, but other than that, “It wasn’t anything to write home about.”

Chief Miller said there were no serious emergency calls or power outages reported, but basement floods are a lingering problem for residents.

“It was such a large amount of water that came down in such a short period of time,” said Miller. And the high tide, he added, seriously slowed the flow of storm water run-off from the street into the ocean. “[The storm water] has a difficult time dispersing into the harbor,” said Miller, “It takes a while longer.”

In Rochester, Police Sargent Bill Chamberlain said a few calls came in for assistance in pumping out flooded basements, and there were some calls reporting culverts backing up, but no emergencies and definitely nothing out of the ordinary.

We had a very easy time of it,” said Chamberlain,” considering the amount of water and the wind.”

In Mattapoisett, Police Chief Mary Lyons said things got a little wet around the edges, as she put it, with calls predominantly for flooded roads and flooded basements. River Road was one of the worst roads for flooding, and Lyons stated the road was still closed after the river crested Monday morning when she spoke with The Wanderer.

Park Street and Driscoll Lane were both flooded also, along with Channing Road. Acushnet Road at Tinkham Pond was closed as well.

“Other than that it was just a big rain storm,” said Lyons. 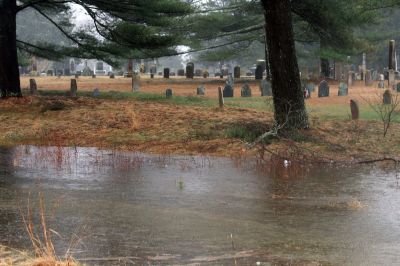