You are here: Home » Features » Stranded Sightseers Greeted with Kindness

If their bus had not broken down, then 34 sightseers from Delaware and Maryland would never have known that the quaint, charming center of Mattapoisett even existed. But there they were, seated at picnic tables and benches, smiling their way into the afternoon and appreciating the hospitality shown to them by the locals who came to the tourists’ aid with tea and issues of The Wanderer to pass the time.

A broken-down bus, far away from home while vacationing around Buzzards Bay, sounds more like a disaster than a serendipitous delight. Yet, on a picture perfect day like Wednesday, July 22 and under a shady tree by the bay, Shipyard Park became a welcomed oasis to a group of out-of-town senior citizens whose Jor-Lin Tour & Charter bus came to a halt on Route 6 after experiencing some mechanical problems driving home on Interstate 195.

“The bus was starting to have trouble last night,” said Dot Tonarelli of Baltimore, Maryland. By the time they reached Route 6 in Mattapoisett, the bus was traveling just under 25 miles per hour. “There was a lot of jerking back and forth,” said Tonarelli.

When asked what went through her mind when the bus arrived at Route 6, Robin James of Delaware said she thought, “Like, can I have a nice spot like ‘this’ and not on the highway?” James looked around at the scenery at Shipyard Park where she was sitting, drinking herbal tea provided to the group by a local business and smiled. “So I’m all right with ‘this’,” she laughed. “It’s beautiful,” added James.

“It’s not the worst place to be stuck, huh?” said Harbormaster Jill Simmons to the group. Simmons, along with members of the Police and Fire Departments, tended to the group of seniors to make sure they were comfortable, handing out bottled water and issues of the local weekly newspapers.

“It’s like having a fifth day of vacation,” said Lulu Heath of Delaware.

The tour group had been on a three-day tour around Buzzards Bay, with the highlights being Martha’s Vineyard, Cape Cod, and Hyannisport. They were set to head back home that morning before the unexpected detour led them to Mattapoisett.

“Everyone’s been so nice,” said Tonarelli. “The scenery, the people – everything.”

James said they were keeping positive and Tonarelli agreed, commenting that they might as well make the most of it.

“We are happy to just walk up and down the beach, enjoy the scenery, eat … and just enjoy the park,” said Heath.

Millie and John Tolodziecki of Delaware sat on a bench together in the shade reading their copies of The Wanderer, looking relaxed and content.

“You couldn’t ask for a nicer place to break down,” said Mr. Tolodziecki.

The group was told that they might be waiting in Mattapoisett for either another tour bus to come get them or for repairs to the broken-down bus – possibly up to five hours. To make the most of it, as Tonarelli put it, many took to the park to rest while others went for walks through the center of Town or sought refuge in the restaurant across the street.

Dennis Stordahl of Delaware said the layover at Shipyard Park was a positive experience for him.

“I think you people are great. You’ve been so kind to us,” said Stordahl. “You don’t usually find that degree of kindness everywhere.” 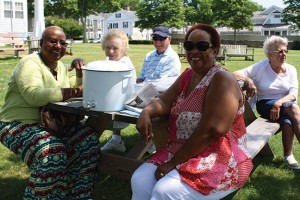 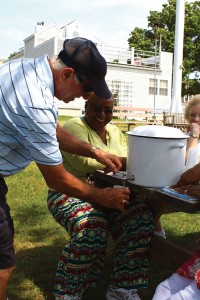 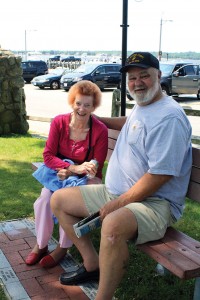