You are here: Home » Features » Souvenir China Donation in Marion

“The first piece I purchased when I was young, and the second piece was given to me by my mother,” Smith said. “I would pick up an odd piece here and there, but later really got into it and started going to shows and dealers.”

All have scenes of Marion, including Bird Island, Tabor Academy, Town Hall, Gilder Hall, Stone Studio, Sippican Casino and Bathing House, and the Universalist Church and parsonage, which is now the Marion Art Center. Various houses and harbor scenes also appear on the pieces.

On the underside of each piece is the maker’s mark. Most were made in Germany, Austria, England and Japan. A circle or square mark states “Made in Germany for William R. Luce, Marion, MA” and “Made in Austria for Steven D. Hadley, Marion, MA.” Hadley was the owner of what is now the Marion General Store. Luce owned a store on upper Main Street.

Originally, the pieces came from Germany and Austria starting in the 1890s, but World War I cut off the sources and production shifted to England.

“The English pieces are of a much higher-quality porcelain,” Smith said. Many of those pieces have intricate gold leaf motifs of diamonds, flowers, and other designs, which are missing from the earlier pieces.

Smith says the pieces range from cheaply made to premium quality. A sketch would be drawn, transferred, layered and colored on the piece. The original cost of the pieces is unknown. The collection is valued at more than $2,500.

“I’ve been collecting for over 50 years, and some cost around $25 and some much more,” Smith explained. “I passed up on some great pieces, because I’d go to the show with a certain amount of money and maybe there’d be something great, but I didn’t plan on spending that much … or I’d go and there’d be nothing of interest at all.”

When asked about how the tradition of purchasing souvenir china by a visitor went out of favor, Smith offered a theory.

“I think it all ended when the camera came on the scene,” he said. “People would rather take home a photo than a piece of china.”

Smith said he is happy to make the donation.

“I was born and raised in Marion and have always had an interest in local history, and I wanted the collection to stay in Marion. It’s all Marion, from Marion and for Marion.” 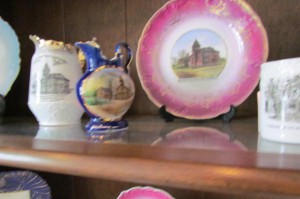