Dateline: Midnight, January 27 – wind is howling, the flying snow frosts windows and collects in the sills and exterior doorways. No one is out on the roadways. Earlier in the evening, as I headed to Town Hall to cover a Conservation Commission meeting, the eeriness of closed businesses and people-less sidewalks caused me to question my wisdom in leaving the cozy confines of my home to sit in a meeting. I would learn later why the meeting had not been re-scheduled, but that is information for another page.

Back home now and hunkered in for the night, even the dog knows not to expect much and has curled himself into a tight ball of fluff. Hibernation – dogs do it.

As the hours float by on snowflakes, my thoughts return again and again to my childhood when ample snowfalls simply meant fun.

We didn’t have all the fancy sub-zero clothing and boots available today. We rarely stayed home from school because of snow. Snow was nothing to fear. Our dads all had chains on their car tires. No siree, Bob! We were tough back in the day. You’ve heard the stories, right? We walked for miles to school in blizzards then forged our way back home again through hip-deep snow and never complained. (Okay, so the school was only a short walk from the house).

And insulated boots? Nope. We had rubber boots or galoshes. If you are of a certain age, you’ll remember the agony of trying to pull on a rubber boot over your shoes. My mother’s method was to place my father’s long argyle socks over our shoes then up over the quilted snow pants and then slip the foot into the toe of the rubber boot. With lots of yanking and grunting on her part, the rubber would finally be snugged into place. After closing up the unforgiving metal buckles on the front of the rubbers, we were finally ready to head into the winter wonderland.

Mittens knitted by our mothers were frequently exchanged on the doorstep for a dry pair. We weren’t about to let wet mittens stop the fun. But oftentimes, it was the feet that failed us long before our frozen fingertips did.

The lack of insulation around the foot, the feeble ability of the galoshes to protect our toes from cold, and the intrusion of snow inside the boot itself put the double whammy on us. Begrudgingly, we eventually dragged our tiny bodies into the house.

The process of dismantling our carefully attired forms was nearly as tiresome for a small child as the process of gearing up to go out. But then we were stuck inside the house until all that wet wool could dry and that took hours. Every cast iron radiator was decorated in wet coats, hats, scarves, socks, and mittens.

Years later, when our grandchildren came along, I’d return to the joy of playing in the snow with a small army of little girls in the backyard making snowmen or slinging snowballs at one another. By then, though, we could stay outside much longer and more comfortably with new types of fabric and insulation materials. Though I often run nostalgically over many of my childhood memories, I readily admit that I love today’s modern coats and boots and proudly own my fair share. (“You bought another coat, Marilou!” That would be my husband talking).

Today, I still go outside in the snow, but I am now aided by snowshoes and poles, coats with artic temperature ratings, and boots for all seasons and weather conditions. Oh yeah, I forgot – I also stick on one or more of those self-adhesive heating pads for good measure.

The hours have sailed by and the gales are still blowing this midday Tuesday, January 27. Here’s hoping I can find a few kids outside, cavorting as I once did – and if I do, I sure hope they let me try out their sleds. 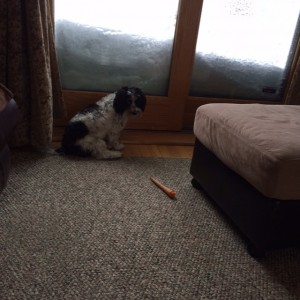