You are here: Home » Features » Skydiving for the Hungry

No matter what the reasons, there are more and more hungry people in the United States today.  The Supplementary Nutrition Assistance Program (SNAP), or food stamps, is bending under the weight of over 45 million Americans who now rely on it to help feed their families.  And that number is growing.

Hunger on the South Coast may not be obvious, but it is far from invisible.  Even with the wealth of discount grocery stores and farmers markets, our neighbors are having more difficulty than ever feeding themselves and their children.

“Life is not all about one life and what you’re going to do,” said Tabitha Tripp, a Tri-Town resident who has seen the faces of the hungry first hand as a volunteer for Mercy Meals & More, a food kitchen in New Bedford which serves free breakfast to anyone who needs it.

“They are open every morning and they feed breakfast to the homeless and the hungry.  You don’t have to be homeless to get a meal,” she said.

These days, it is often hungry people, not necessarily homeless, that turn out for breakfast at the kitchen.

“What breaks my heart is sometimes I see families come in: moms, dads, and their kids. And they’re one paycheck away from being homeless, so they come in to get a free breakfast so they can put some of that money toward rent,” she said.

Tripp decided that she was going to do something other than serve food in order to help the community.  The church volunteer has organized an event for Mercy Meals where she and five others will jump out of a plane in September to raise money for the kitchen.

While there seems to be no shortage of people needing food, there is always the problem of food shortages at the kitchen.  Tripp said that there’s no guarantee that they will receive a certain amount of donations regularly, so this fundraiser is to help partially off-set that.

The sky dive was supposed to happen on August 11, but was postponed due to bad weather until September 15.  In that time, two more people joined the jump and they’ve been able to raise more money.

Though this is not her first time jumping, it has proven to be a great way to raise awareness.

Tripp will be jumping on September 15 from Newport Airport in Middletown, Rhode Island.  For more information, you can visit the South Coast Community Church in Fairhaven or go to www.mercymeals.org. 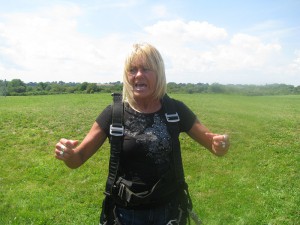