You are here: Home » Features » Showstoppers Jump, Shout and Shake

Fingers were snapping and hands clapping at the free holiday concert hosted by the Showstoppers singing group on Saturday, December 29 at the Marion Music Hall.

Over a hundred people turned out to hear the voices of twenty-seven young people ages 5 through 19 sing a variety of traditional and non-traditional holiday songs such as Silver Bells, Santa Baby, Jingle Bell Rock, Let it Snow and many more.

Co-founder Kelly Zucco told the audience, that in addition to the Showstoppers singers that six ‘guests’ who were former Showstopper members were home from college for the holiday break and would sing.  The guests included Erin Morrissette, Stephen Lacombe, Ben and Emily Bunger, Johnny and Jillian Zucco and Holly Cardoza.

The students, who didn’t have a chance to rehearse were seen singing in the hallway prior to the concert.  They sang ‘Till the Season Comes Round Again’ and did a splendid job of it.  Jillian Zucco and Stephen Lacombe warmed the audience with a lighthearted version of ‘Baby It’s Cold Outside’.

“This is the final performance of the season,” said Director,Kelly Zucco.  “We had twenty-four performances, mostly at senior centers, nursing homes and at the local mall.”

The young singers are primarily from the tri-town, but some are from Acushnet, Westport, Wareham, Dartmouth and Fairhaven.  Singers audition to earn a place in the group.  Auditions are held in the fall, to coincide with the beginning of the school year.  Zucco founded the organization with her mother, Mary Lee Guillopte eleven years ago.

Many of the children sang as a duet, including 7 year olds Ayla Guillotte and Will Wikston who stole part of the show with their singing of ‘I Saw Mommy Kissing Santa Clause.”  Wikston, in a black suit and white tie also wowed the audience with ‘All I Want for Christmas is My Two Front Teeth’.

A highlight of the show was the singing of ‘Mary Did You Know’, with a real infant held by a costumed Mary, with angels and wise men kneeling at her side and a standing angel behind her with wings spread.

Another hit was Sam Guillotte singing Frosty the Snowman.  Other holiday tunes included Up on the Housetop, I’m Dreaming of a White Christmas and I Got Nuttin’ for Christmas with the singers poking each other and shaking fingers at each other.

The Showstoppers organization is a non-profit, run by volunteers.  The group has been invited to sing at Disney World in Orlando, Florida in August of 2013.  The group is selling CD’s of their performances and Dinner for Two booklets.  They will be singing two songs at the opening performance of New Year’s Eve at New Bedford’s First Night celebration at 4:30 and again, for a full concert at 5:30 at the annex of the Zeiterion Theater. 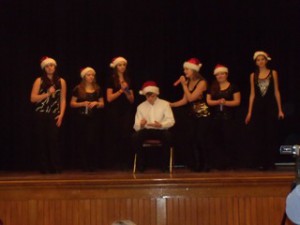