In 1863, the Third Regiment of the Massachusetts Volunteer Militia was stationed at Fort Monroe in Virginia. That year, President Lincoln’s Emancipation Proclamation went into effect, an order that required the army to treat anyone enslaved in Confederate territories as free persons.

Soldiers at Fort Monroe were already used to dealing with slaves seeking freedom. In 1861, General Benjamin Butler of Massachusetts declared that any slaves escaping to Union lines would not be returned to slavery. General Butler was not exactly freeing slaves. He considered them contraband of war. However, many slaves considered it freedom and began to head toward Fort Monroe. The fort soon became known as “Freedom’s Fortress.”

Sometime between 1861, when General Butler issued his orders on dealing with escaped slaves, and 1863, when the Emancipation Proclamation went into effect, a slave named William Scott began working as an assistant cook with the Third Regiment.

William was born into slavery around 1822 in Virginia. He was enslaved in Hicksford by a man named Nathaniel Land. At some point, William was sold to a man named George Gray of Windsor, North Carolina.

By 1850, George Gray owned five human beings ranging in age from 20 to 80 years old. 10 years later, Gray owned even more people, 17 in all. The youngest was six years old. It is presumed that Gray lost his slaves to freedom around 1863, including William Scott. In 1869, Gray’s wife, Helen Land, died and Gray died 10 years later. The inscription on his stone in Rose Field Cemetery in Windsor reads: “In memory of George Gray. The righteous hath hope in his death.”

While a slave under George Gray, William became involved with a slave woman named Priscilla Collins. Priscilla had been married to another slave and had children. While slave marriages held no legal standing under local or federal law, enslaved humans married out of tradition, the belief in the importance of family and, of course, love.

However, slave marriages could be broken at anytime. A slave owner could decide to sell a slave who was married while the spouse stayed behind. Children of a slave couple could be sold as well. Families were often ripped apart to never see one another again.

Priscilla was born into slavery around 1805 and was owned by a local lawyer, James Allen. Among Allen’s possessions that sold at his estate sale after he died in the late 1840s were six Waverly novels, five tea spoons and “1 black man to Dr. Bond.”

However, the circumstances of the war would force them apart, but not forever. While William was working as the assistant cook for the Third Regiment, he headed north with a company that was made up mostly of men from Lynn, Mass. It is unclear why he didn’t travel back to Lynn with the company. Instead, he ended up in Mattapoisett.

William evidently became popular in Mattapoisett. The whereabouts of Priscilla were either known by William or a group of people who befriended him in Mattapoisett and tracked Priscilla down. In 1868, she was brought north to be reunited with William.

In June, William and Priscilla were married on Mechanic Street at a house that had been “fitted for their use.” At the time, this was the only house on the west side of the street from County Road to Church Street besides a school house that sat on the corner of Church and Mechanic Streets.

In attendance were 75 of their friends “representing all classes” who had made the arrangements for the couple to marry. William and Priscilla received many gifts which were described as “new, useful and entertaining.” The evening of their wedding was spent at their home with their friends singing songs and celebrating.

William went to work as a farmhand and by 1880, Priscilla’s 13-year-old granddaughter, Delia Allen, was living with them as a family.

Five years later, Priscilla would become sick and die. Her cause of death was listed as enlargement of her liver. She had survived slavery, become a free woman and lived to be around 80 years old. William was now living alone. Delia was living in New Bedford, possibly with a family as their servant. However, in 1889, she too became ill and died of a consumption-related illness.

William continued to live in his Mechanic Street home for the next couple of decades, working as a laborer. In early November, 1912, he became ill. He was in his 90s working as a gardener but time was taking its toll and his heart was failing. On December 12, 1912, William died in at home.

He was laid to rest in Cushing Cemetery, his headstone noting his origin as a slave. Nearby are the graves of Priscilla and Delia, forever reunited with his family. 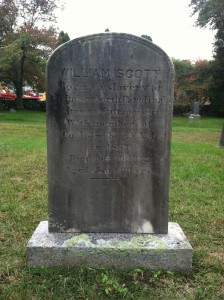