You are here: Home » Features » Rochester Pauses to Remember

As spirited tiny Cub Scouts scampered about the grounds of Rochester’s Town Hall on May 27, older kids and adults quietly waited for the Memorial Day service to begin.

The joyful sounds from the children mixed with birdsong and misty cool air as the skies darkened, threatening to rain on the annual parade. But the weather held off long enough for the citizens of this quintessential New England community to honor their servicemen and women, past and present.

Opening the ceremony with a prayer by Reverend Robert Ripley, pastor of the First Congregational Church of Rochester, there followed the “Star Spangled Banner” beautifully played by music students from the Rochester Memorial School Band under the direction of Christine Williamson before the parade marched towards Daggett Square.

“It symbolizes freedom … that should be treasured,” Joseph Kingara said.

Army JROTC Commander Zachery O’Brien thought it was a time to remember, “…To think about those who have fought and died … to pay respect.”

Members of Girl Scout Troop 81001 concurred that Memorial Day was a day of remembrance, a day set aside from all other days specifically to honor those who had served.

Board of Selectmen Chairman Greenwood Hartley III thanked veterans around the globe, saying it was not by luck that we enjoyed freedom but by the sacrifice of others.

At Daggett Square, Selectmen Paul Ciaburri and Bradford Morse joined Hartley in reading aloud the names of servicemen and women, names forever emblazoned on the memorial tablet that graces the tiny square.

The selectmen also remembered W. Becket Kiernan, whose recent passing shortly after joining the U.S. Marine Corps had been felt throughout the Tri-Town area. Kiernan was remembered as a talented and courageous young man who had dreamed of serving his nation as a Marine. A moment of silence punctuated those comments.

The ceremony included the reading of names, those who were enlisted in the military from the Civil War through to more recent global events such as Vietnam and Desert Storm.

“All I can really say is the most important words have already been spoken, the names of the people who served…” he said. “When we endure the inconvenience of weather, it is nothing,” when compared to those who have served.

Jennifer Williams, Project 351 ambassador, also spoke. Project 351 is a program first introduced by former Governor Deval Patrick and continued by Governor Charles Baker that engages eighth-grade students from throughout the 351 cities and towns in the commonwealth in civic activities. Williams read a proclamation from Governor Baker that was preceded by the reading of the Gettysburg Address by Boy Scout Michael Ebey of Troop 31.

At the conclusion of the ceremony, the community was invited to enjoy refreshments inside away from the cold wet day. As the Cub Scouts pounded up the steps, one Scout from Pack 30 said to another, “That was important.” Out of the mouth of babes. 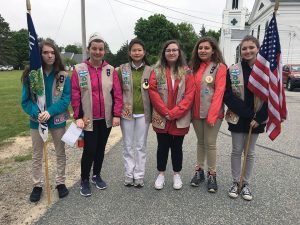 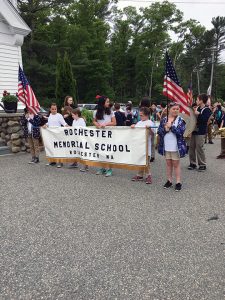 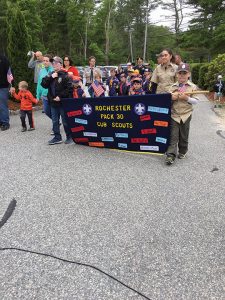