It has been a tradition since 1909, and on February 20 Rochester’s newly deemed ‘oldest resident’ was handed the Boston Post Cane at his current residence at the Sippican Health Center in Marion.

Armand Cournoyer, who turned 100 years old on February 3, was honored during a ceremony in the library of the nursing home when Rochester Selectman Naida Parker passed the cane to Cournoyer, surrounded by his family and friends. The ceremony was meant to take place on his 100th birthday; however, a string of snow and ice storms resulted in three postponements of the happy occasion.

Cournoyer was born in New Bedford and lived most of his life in Acushnet, working at the Acushnet Process Company first as a machinist, then as a time study supervisor, eventually advancing to salesperson.

“He played until he was 93 years old,” Royant said. “And he won a couple trophies, too.”

Cournoyer also spent time later in life traveling with the Royal Travelers, a travel club for seniors, visiting places such as Alaska, the Caribbean, and Europe.

Royant turned to her father and asked him, “Do you like being 100?”

Cournoyer responded with a shrug, saying, “It doesn’t feel any different … I enjoy every day.”

They were the little things in life that mattered to Cournoyer, said Royant. “The small stuff,” as Cournoyer’s other daughter, Claire Parent, described it.

“Camping was a big deal to us,” Parent said. “Family time,” added Royant. “Family life was really important to us.”

Parker greeted Cournoyer, asking him, “How do you do?” in French.

“You’re the oldest resident in Rochester,” Parker announced to Cournoyer, who sat in his chair like a celebrity surrounded by the press, friends, and three more generations of family members.

The family held a private party on February 3 to celebrate Cournoyer’s 100th birthday, even though the Boston Post Cane event with the selectmen was postponed.

The cane was passed to Cournoyer from the late Ralph Winfield Walker, 100, a former Rochester selectman. 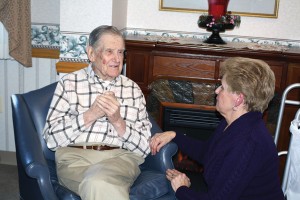 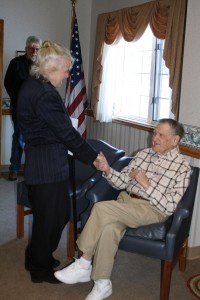 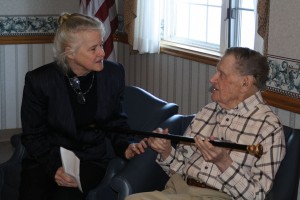 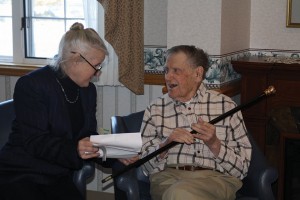 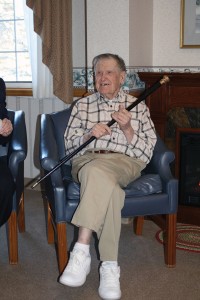 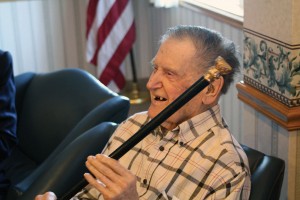 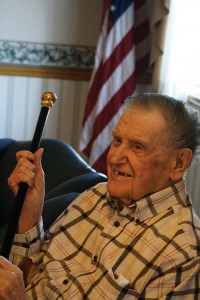 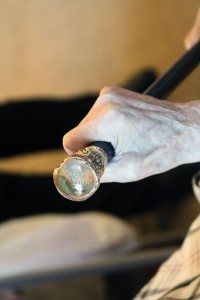 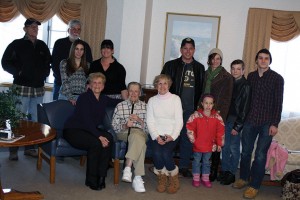