It’s been two years since the last historic barn, home, and garden show, organized by the Rochester Land Trust.  This year saw the return of some old favorite places as well as the addition of a couple new locations.

The self-guided tour was held on Sunday, June 24, and included five total stops along the route map.

“We’ve had a lot of different properties in the last few years, so it’s been really nice,” said Norene Hartley, of the Rochester Land Trust, who was situated outside the Town Hall, seeing tickets, t-shirts, and passing out maps to the interested parties.  “This is the third one we’ve had. We go to the landowners to find out who would be willing to participate, then we decide who to include based off that.”

This year saw the premier of Sterling Point Farm on the tour, located up on the Middleboro line on Walnut Plain Road.  The farm is home to several horses of various breeds.

“We have painters, saddlebreds, and quarter horses,” said caretaker Cheryl Lavoie.  Being on the tour increased their foot traffic by a few dozen people throughout the course of the day.  “It’s nice to have different visitors and to have people look around.”

A few miles south, you arrive at Englenook Farms, on High Street, also a first timer on the tour.  The farm has a wide variety of livestock, from horses to chickens to llamas and alpacas.  Many of the animals there are also rescue animals, and most are exceedingly friendly.

Joanie Chapman is in charge of the animals there and makes sure they get the kind of care that may have been denied them by previous owners.  She feeds all the animals specific organic diets.

“Here it is as close to organic as you can get without being certified,” she said, citing the expensive and extensive process many farmers go through in order to be officially recognized as proprietors of organic foods.

The next stop on the tour was at the home of Mark Whalen and Randall Elgin, who four years ago, built a completely eco-friendly home that features a wide variety of green materials used to reduce the amount of energy used by the building.

“The best investment you can make is in good insulation.  If you have good insulation, you can have a smaller furnace and use less energy,” Whalen said.

The furnace at their home on Foss Farm Road is mounted on the wall in the basement and isn’t much larger than an industrial electrical control panel.  The insulation in the walls is made up of rebar-enforced cement, sandwiched between interlocking bricks of Styrofoam.

“We just wanted to show people how accessible this technology is and how much it can help,” he said.

Down on Vaughan Hill Road, people could tour the Rusinoski property; a large home designed and built by a Boston stonemason, with a three-car carriage house-style garage.  The home features large, sprawling lawns and top-notch wood and stonework.  Don’t have a car?  The property (which is for sale) is suitable for easily landing a helicopter.

The final stop on the tour was down on Mattapoisett Road at the locally famous George Church Museum, featuring an array of antiquated, largely manual, farming and industrial tools.     “My family had the first saw mill on the Mattapoisett River,” Church said.  His ancestors arrived here in the mid 1700s and the home he lives in dates back almost as far.  “I ran the saw mill until maybe 20 years ago,” the 10th generation American said.

His museum is an open floor barn and contains hundreds of tools and machines, many of them powered by man or horse.  “I used to live in Marion and New Bedford.  I just gathered the pieces up.”

For more information on the Rochester Land Trust and how you can help, visit http://home.comcast.net/~rochesterlandtrust/ 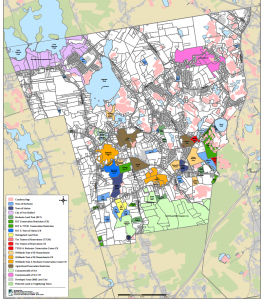