One day, 10 year-old Emma Levasseur was watching television in her home in Rochester when she saw something that made her stop and think.

It was a commercial that came on about a school that was holding a shoe drive to collect new shoes and socks for millions of orphans around the globe that do not have any shoes.

Emma felt inspired to do something about it, so she gathered her paper, markers, and glue – determined to make a difference.

“I decided that I wanted to do [a shoe drive], so I made a poster the next morning,” said Emma. She put together information she gathered about the project and created a poster proposal of sorts to show to her mother, asking if she could contribute to the cause.

“Oh. Wow,” said Emma’s mom, Wendy Levasseur, when Emma approached her with the poster. Not sure how she would go about organizing a shoe drive, Wendy told Emma, “Why don’t we bring it to Ms. Griffin and see what she says?”

“She came with a plan,” said Griffin. “She had an idea of what she wanted to do.”

RMS Principal Derek Medeiros gave the go ahead to allow Emma to place collection bins at school so her classmates and teachers could donate not only shoes but socks, too. On the morning of May 28, Emma announced the upcoming shoe drive to her peers, beginning by asking them if they knew how many orphans out there went without any shoes. Emma’s answer: 145 million.

Emma’s classmates responded to her shoe drive idea with enthusiasm, eager to rush out and buy new shoes and socks for an orphan in need.

In addition to the donation, Emma has asked that everyone who makes a shoe donation include a short note inside one of the shoes for the child who will receive them, so that they will know that they are thought of and cared about.

Emma’s gesture of goodwill stretched beyond just the scope of her school shoe drive. Wendy said Emma had an approaching birthday party back in late March, and asked her mother if it would be all right to ask her party guests to bring her pairs of shoes and socks for the shoe drive – in lieu of birthday presents.

Emma’s brother Aiden, a first-grader at RMS, has been an enthusiastic helper as well, helping to decorate large plastic donation bins for people to place the donated shoes and socks.

“As soon as he saw her do this,” said Wendy, “he said to me, ‘I want to do a book drive.’” Wendy added that young Aidan is always “trying to give his money away,” asking if he can send his savings to help cure cancer, among other things.

“I think it’s great,” said Mike Levasseur, Emma’s and Aidan’s father. “As a parent, you want your kids to be selfless at times, and to see this is just great.”

The organization that will be accepting the donated shoes and socks is Buckner Shoes for Orphan Souls. It has already collected 2.75 million pairs of shoes and sent them to 76 different countries around the world. Buckner’s 2014 goal is to deliver its three-millionth pair of shoes by January 1, 2015.

As part of the process of organizing with Buckner, Emma had to submit her own personal goal and naturally, Emma aimed high.

Perhaps a little too high, in Wendy’s opinion, suggesting they bring it down from 250 to an attainable 50 or so pairs of shoes.

Emma humbly asks the community to contribute to the shoe drive and make a donation of a pair of shoes or socks with a note of encouragement to the orphan recipient. A drop box is available at the school in the main entrance vestibule during school hours.

The shoe drive kicks off on June 2 and will continue until the last day of school on June 18.

Buckner says the sizes most in need are sizes Youth 1-Adult 9.

Emma is also collecting monetary donations to help cover the cost of shipping the shoes to the humanitarian aid center in Dallas, Texas. It is her responsibility to send the shoes and postage can get pricey, depending on how many shoes she collects.

“This is a very generous community,” said Griffin. “If there’s ever a place to do it, it’s here in Rochester.”

And how will the orphans feel when they receive their new shoes?

“They’ll be happy,” said Emma. And, undoubtedly, so will Emma. 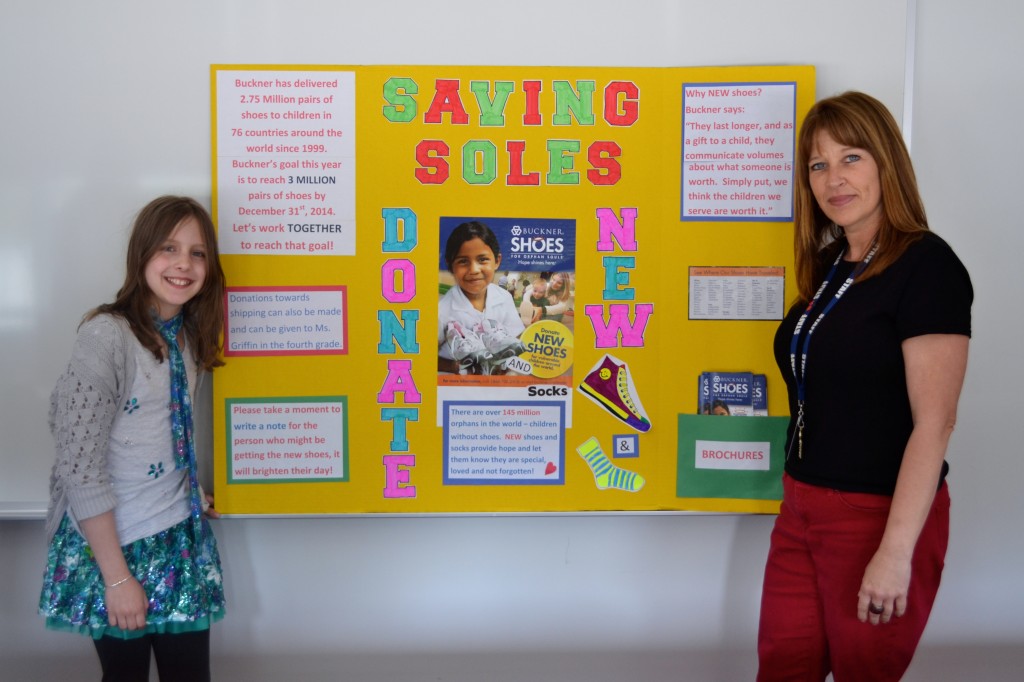