The melody and lyrics of this New Year anthem of remembrance or fraternity sung when the clock strikes midnight was first transcribed by Robert Burns in 1788.

Burns set the tune to the traditional folklore of another poet, making him co-author of this emblem of a musical year ending soon to be known all over the English-speaking world.

In Scotland, it became associated with the traditional dance called Hogmanay when everyone joins hands around in a circle like a square dance. At the beginning of the last verse, everyone crosses arms across their chest as the right hand reaches out to grasp their neighbor’s hand in friendship as in my illustration, which also shows Burns taking a champagne cup of kindness.

The song soon became a tradition of New Year’s Eve as well as other reminiscing events. They included farewells, funerals, and other memorials, while also symbolizing new beginnings such as graduations, scouting jamborees, election of new governments, hymns, weddings, parades, and anthems, and best-known incorporated in “America the Beautiful.”

Over the years, it transcended into many foreign languages when its pentatonic scale was matched to scales used in Japan, Korea, India, China, and other Eastern Asian cultures. However, it perhaps reached international recognition when in 1929 it was greatly aggrandized by Guy Lombardo and his Royal Canadian Orchestra. For half a century, Lombardo charmed the entertainment world with his accompaniment of New Year celebrations until his death in 1977.

The song became popular in high New York society for gathering in Times Square for the ritualistic dropping of the ball at the stroke of midnight by people like William Randolph Hearst and Henry Ford. Other industrialist Americans could personally relate to Burns as one of them, because he was a truly self-made man.

For instance, in Scotland he was known as the ploughman’s poet, deeply inspired and connected with rural laborers by traveling through the countryside, collecting and mending verse and music melded into his interpretative prose – one of his most famous is the iconic tale of Tam o’ Shanter.

He said that he learned “Auld Lang Syne” from talking with an old man in his country travels, perhaps making it a cultural inspiration of historical Scotland.

Consequently, may I suggest that at the stroke of midnight during the playing of the song, we all might lift a cup of kindness or a glass of champagne as a toast to his immortal inspiration.

At this fleeting moment, time may seem to stand still enough to bring back the memory of auld acquaintance in our lives, and for us to deeply reminisce during the meaningful passage of one year into another. 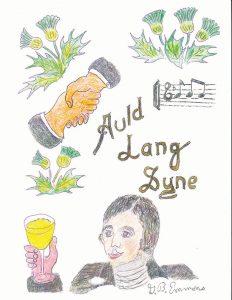