You are here: Home » Features » Ripe and Ready – The Dry Harvest

The word for the year is ‘dry’. Dry dirt where once was water; parched pastures, waterless skies, and dusty earth.

Water is one of those things nobody really thinks about until not much of it is there for us to do with it what we want, when we want. Meanwhile, impatiens grow leggy and lackluster and hydrangeas wither during the at-first voluntary, but now mandatory, water ban on non-essential outdoor watering.

Think of Tri-Town’s present-day generation of farmers and growers with the ebbing reservoirs at the dawn of harvest time. Consider cranberry growers, especially, whose annual cycle of bog flooding, cranberry floating, and berry catching hinges on enough rain over the next week or so to regenerate reservoir supplies surrounding their crop.

But the drought conditions have not left the cranberry grower completely high and dry in any way. Again, the keyword here is ‘dry’, and the dry harvest, which has been ongoing since the middle of this arid September, is in full swing – with or without water.

And it’s a good thing, too. Certainly dry picking is laborious and tedious at times, with the manual labor of walking with the old mechanical Furford round and round the perimeter of the bog circling at lengths in a slow spiral toward the center, plucking and picking and plunking into burlap sacks that only hold enough berries for about the length of 20 to 25 feet of bog before the operator must pause to unload a full sack and replace it an empty one.

The Johnsons – Dana, Paula, and their two sons – have been pirouetting around the bogs, their stage for this annual harvest dance of the cranberry grower, dry picking their 30 acres of bogs located in Rochester, their hometown, and neighboring Middleboro.

The Johnsons’ bogs, which have remained in the family for four generations now, like many bogs in the region, produce year after year the livelihood of the Johnson family. They painstakingly participate in the cyclical life of cranberry growing: pulling all-nighters during frosts in the spring to keep the bogs from freezing, irrigating throughout the summer until harvest time, and keeping close watch during the winter months to be sure the low-lying vines stay safe from frostbite.

“From bud to berry,” said Dana. “You miss one frosty night and that’s your whole year’s pay…. The only time we’re really relaxed is after the harvest.”

As the Johnsons dry picked their bogs on the morning of Monday, September 27, the dried-up irrigation ditches that outline and zigzag the acres of cranberries and the dwindling depths of the surrounding water reservoirs had no influence on what was being done that day, for there is no need for water during a dry harvest. In fact, water would put a damper on the whole operation, delaying it until dry conditions returned again. And at a pace of about an acre a day, time ticks pretty loudly when you’re dry picking.

Dry picking is the Johnsons’ preferred method, selling their harvest as fresh fruit instead of the ‘wet pick’, which is sold for juices and sauces. Fresh fruit sales are more lucrative, said Dana, making the more time-consuming work worth it.

“It’s easier to flood,” said Dana, “there’s much more labor to dry pick.” But at this time, dry picking in such dry weather conditions is actually preferred, as opposed to the wetter weather for the wet harvest – for which conditions certainly are not very accommodating this point in the year.

“This year, almost everyone is hurting for water,” said Dana.

Although the dryness has affected the crop – to some extent causing variations in size and color – there is still some time for the climate to further enhance the berries.

“Cold, crisp air and sunny days like this,” said Dana. “That’s what colors them up nice.”

Dana has been doing this since he was 17, and he’ll be doing it for the rest of his working life, likely, until his sons take over.

But Paula, said Dana, she was always the nucleus around which all the Johnsons’ aspects of cranberry life revolve.

After all, behind every good cranberry grower, Dana says, is a good woman. And as they dry picked the morning away on Monday, Paula literally was there behind him, picking up with her identical Furford the berries that Dana missed, together dancing the dance that is the life of a cranberry grower. 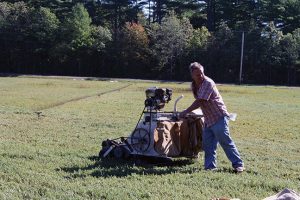 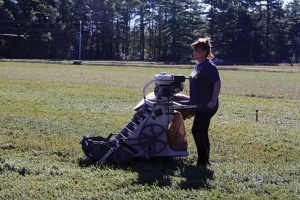 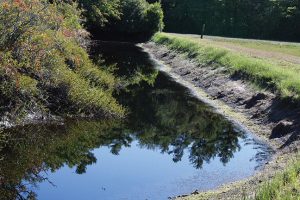 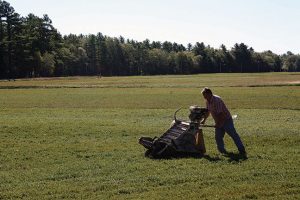 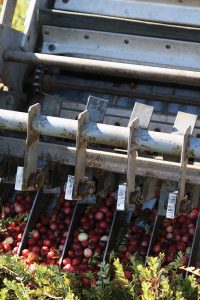