You are here: Home » Features » Record-Breaking Day in Boat Race

Rochester’s own Dan Lawrence and William D. Watling III owned the 2013 Rochester Memorial Day Boat Race on Monday, finishing with a record time of 1:46:59, narrowly besting the 1:47:02 mark previously held by C.J. Hedges IV of Hamden, Conn., and Sean Shaw of Rochester in 2005.

“High water” was the story of the day, with heavy rains from last week combined with sunny conditions on Monday making the Mattapoisett River a perfect raceway for a record-breaking day.

“We’re looking at a walking race if it wasn’t for that rain,” said Race Coordinator Art Benner at the closing ceremonies at Rochester Memorial School Monday night. “There was plenty of water, and it was nice and dry for spectators and the contestants.”

In all, five teams finished the race in less than two hours by paddling and carrying their own handcrafted boats through the course and across the finish line, with Alex and Paul Milde of Mattapoisett (1:48:30) and Jake Goyette and Ian MacGregor of Rochester (1:51:37) rounding out the top three in the Open Division.

“The water’s high, so the boats can go nice and fast,” said race official David Bold from his post on Wolf Island Road, the unofficial halfway point of the race. “There aren’t a lot of rocks.”

Racers, race officials and spectators alike lauded the hard work of numerous volunteers who helped prepare the course for the historical race for which so many return to Rochester and Mattapoisett each year. Hurricane Sandy and winter storm Nemo left countless trees and branches blocking the river, and Benner said that said that the race would have been impossible to run if it wasn’t for all of the help they received this spring.

The race, which is a free event, was sponsored by the Rochester Fire Department and depends on several other sponsors, as well.

In the women’s division, Amy Hartley-Matteson of Mattapoisett and Katherine Hartley of Rochester (2:11:14) won for the third consecutive year for the second time (they also three-peated in 2007, 2008 and 2009). First place in the Co-Ed division went to Andrea and Sean Shaw of Rochester (1:59:01), who also set a new record in that division and placed sixth overall; in the Parent/Child Division, first went to Trevor and Gary Stopka of Rochester (2:05:13).

In all, 65 teams completed the race, which crosses roads at several points, winds down paths through the woods, and involves some fairly sketchy stretches of river. Racers traveled from as far as Saskatchewan, Canada, and Hazard, Georgia, as well as from several local cities and towns including Rochester, Mattapoisett and Marion.

This year was the first year that they used a lottery-style start for the race, with the top 10 teams from last year being chosen at random to decide who started where.

“I think people liked it,” said Benner, noting that they will probably continue with the new changes in the future.

Teams were dispatched a minute apart starting at 8:30 am from Grandma Hartley’s Reservoir on Snipatuit Road in Rochester, with the race finishing at the Herring Weir on River Road at Route 6 in Mattapoisett. Spectators flocked to several other locations, as well, including crossings at New Bedford Road, Rounseville Road and Wolf Island Road, among others.

Notable performers include 2-year-old Chloe Harding and her father Harrison of Rochester. Chloe is a cancer survivor, having undergone a bone marrow transplant for leukemia as a baby.

Kristen Roy of Rochester, whose son Tucker is 5 years old and competed in his third consecutive race with his father Jonathan, said that the race is a big event for the entire family. The duo raced in their boat named The Wolf Islander, after the street on which the family lives on and crossed during the race.

“It’s exciting for us,” Roy said. “The whole race, he didn’t stop the entire time.” 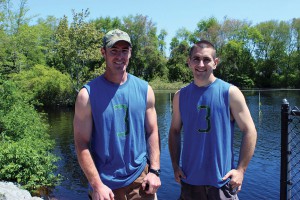