Renovations to the 1827 Mattapoisett Friends Meeting House are progressing nicely. The rotting subfloor has been replaced and the cellar has been shored up, all without significant issues, and the Friends are ready to invite the public to an Open House on December 10.

Still, one particular matter that literally came to light as a result of the renovations has been stirring up some talk amongst the friends since it was discovered a month ago on October 29.

That Sunday, fellow Friend Tom Kinsky was up on a ladder 12 feet above the ground doing a little work on the trim board of the roof when he noticed something – a date and a name carved into the wood.

Being that there hadn’t been any significant work done on that part of the building for some time, it was quite possible that that “68” was not 1968, but 1868.

Kinsky contacted other Friends, and he soon circulated an email advising the others of the “graffiti” that he had discovered.

“And the word was ‘graffiti,’ so the first impression was, ‘Oh no!’” said Deena Kinsky, Friend and wife to Tom. “It’s a newly renovated building! Then we saw that it was over a hundred years old and it was hidden up out of view, so it was OK.”

Fellow Friend Alan Harris started looking into the history of the name featured in the carving right away.

Harris encountered a website portraying the grave of an Allen G. Ashley buried at the North Rochester Cemetery who was born April 1, 1840 in Dartmouth and died January 24, 1928, alongside his wife Clara I. Crapo, born in 1847 and died in 1923.

Could this be the Allen Ashley who carved his name into the roof of the meetinghouse?

Upon further research, Harris came across an obituary for an Allen Crapo Ashley, Jr. born March 1924 and died December 2015, buried in Riverside Cemetery in Fairhaven. Between them are four children also on the gravestone: Minnie, Bertha, Grace, and Almon.

Now the Friends of the Mattapoisett Meeting House are wondering if the Allen Ashley who left his lasting mark in the wood of the structure he quite possibly helped build has any remaining relatives in the area who would be interested in knowing about the ‘graffiti’ and could perhaps shed some light on one man who may have performed some work on the building that still stands today.

If you think you may be a relative or have any relevant information, you are kindly encouraged to contact the Friends at mattquakers@gmail.com. 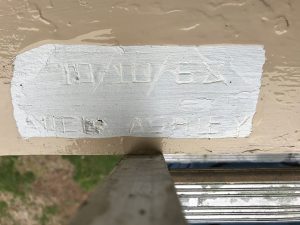