You are here: Home » Features » Preserving the Presto Press

If you’ve lived in the Tri Town for more than 20 years, there is no doubt you’ve heard of the Presto Press – a free weekly publication that lined the shelves of local shops and community centers for almost 40 years.

And you’ve probably seen the well-known operation out of 15 Mechanic Street in Mattapoisett. You may recall the press releases, local new stories, and the beautiful artwork that adorned the covers and enhanced the advertisements. (The Wanderer adapted much of the style of Presto Press).

With the passing of Presto Press founder Donald Jason in November 2010 and more recently his wife, Joan – who served as the typist throughout the decades of its publication – the surviving family inherited a treasure of Tri-Town history.

Recognizing the preservation potential, a few local individuals and groups have decided to act to ensure this piece of history does not vanish forever.

Mattapoisett resident Don Cuddy was the first to reach out to the Jason family in the hope of finding a way to keep Presto Press in the history books.

“He really wanted to preserve every copy of the Presto,” recalled Sharon Hartley, the niece of Donald Jason.

Soon the Mattapoisett Free Public Library and the Mattapoisett Historical Society teamed up, with the idea of digitizing the entire collection and making it available at the library. In that way, anyone who wants to conduct a search of material in past issues – including news, press release and ad content – can access it immediately at their fingertips.

Digitizing the entire Presto Press is no minor undertaking.

“I called Woodley Hartley [Sharon Hartley’s husband] and asked, ‘Are there 40 boxes [of issues]?’ There was dead silence on the other end,” Seth Mendell of the Mattapoisett Historical Society recalled. He said Mr. Hartley explained to him that many issues were unaccounted for and likely could fill 100 boxes.

“We spent hours going through the issues, and what we found was that there were many duplicates. 44 boxes would be an absolute set. Every single issue,” Mr. Mendell said.

The first issue released in 1954 had about 16 pages, but towards the end of the Presto Press run in 1992 the number of pages was closer to 80, he said.

Knowing that the work was not cut out for them, Mattapoisett Library Director Susan Pizzolato decided to seek a grant from the Digital Commonwealth and Boston Public Library to digitize the collection at no cost. As such, the work of extensive cataloguing and digitizing would be outsourced and not strain local resources.

“You’ll be able to see ads and the copies, advertisements, and wonderful social history. It will also serve as a public record for local government,” she added.

While Ms. Pizzolato works with the Boston Public Library to try to make it happen, the issue of where to store the entire collection posed another problem. Thanks to the Mattapoisett Historical Society, the effort received funding for the storage of the 44 boxes, equipped with special digitized labels for retrieval, at Brownell Storage.

“The collaboration has been wonderful between [Mr. Cuddy] and the family and the historical society and library. It appears this will go forward,” Ms. Pizzolato said. “I’m excited to be able to preserve the history of the Tri-Town.”

Inside these 44 boxes contain thousands of issues that not only chronicle Tri-Town history, but represent the artistic and entrepreneurial ambitions of one Mattapoisett family.

Sharon Hartley vividly recalls the lives her uncle and grandfather – Donald and Walter Jason – led as the founders of Presto Press (which was named Presto because readers looking for services were said to open the issue and say “Presto!” when they found what they were looking for). Indeed, the whole operation was a family business.

After serving in the Navy, studying commercial art at Williams College and a finishing a stint as an artist in Boston, Mattapoisett native Donald Jason returned to his hometown to pursue his father’s dream: starting a community paper.

“When they decided to embark on that adventure, my grandfather was the salesperson and he’d go all around the area, and even around the cape, and he would bring back the ads. And my uncle, the artist, would set up the ads,” Ms. Hartley explained of the paper’s beginnings in 1954.

As a little girl who lived in the same house of her grandfather, Ms. Hartley grew up with the Presto Press. “I was little then, so it was always a part of our life.”

She said the issues represent old fashioned journalism with stories, press releases and ads hand typed, the issues collated by hand (often with friends and family pitching in at deadline time), and artistic sketches that pre-dated computer graphics.

“Whenever I’d visit him, he’d be at his architect table standing, and he would be cutting and pasting,” Ms. Hartley recalled. “I remember this special instrument that would make the letters. So he would trace the letters around this template, and he would create letters of different sizes for the ads – and sometimes he drew the pictures with pen and ink.”

As a master artist, Mr. Jason also would illustrate the covers with beautiful renderings of the town and its nautical character, and even drew historic figures like John Glenn and Abraham Lincoln.

Over the years the paper transformed from a small 16-page leaflet into an 80-page journal of everything Tri-Town.

“It’s kind of amazing the growth of the sophistication over the years,” Ms. Hartley said.

Mr. Mendell of the Mattapoisett Historical Society said that the issues, if preserved, will be a “very valuable asset to the town.”

“It’s like having a slice of time of 40 years of Mattapoisett history at your fingertips that you can search and access immediately. That is absolutely remarkable. It is really a gift to the history of Mattapoisett. Just to have that slice of time preserved time for many generations to come is fantastic,” he said. 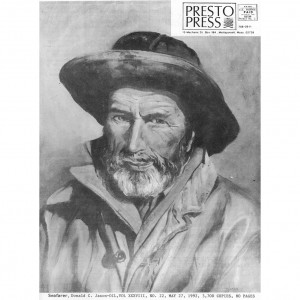