You are here: Home » Features » Pendleton Disaster Continues to Intrigue

Just what is it about the 1952 U.S. Coast Guard rescue of the S.S. Pendleton off the coast of Cape Cod that is still meaningful and relevant today after 65 years and tens of thousands of other rescues since that night?

Saving a life is the highest level someone can go in the service of others, says Maritime Historian and author Theresa Mitchell Barbo. “You’re hitting the highest ceiling of service when you’re going out to rescue someone else.”

So why does the story of the Pendleton disaster still resonate throughout the annals of history, asks Barbo, author of the book The Pendleton Disaster off Cape Cod, now in its 3rd edition.

“Because they were not supposed to survive,” said Barbo. “They thought they were going to die when they went out, but they didn’t.”

Barbo refers to the five Merchant Mariners and the 32 surviving cadets aboard the endangered vessel caught in a violent storm on February 18, 1952 – the boat split in half, leaving two pieces to toss upon 30-, 50-, 60-foot seas and dozens of souls clinging for life in the frigid darkness of night.

“You were not wearing a $3,000 Mustang rescue suit that you are wearing now,” said Barbo. Just rubber boots, perhaps some wool, a pea coat … and it was also getting dark.

And these five men had never even trained together for a rescue mission, she added. “As they were leaving, they really thought they were going to die.” They sang the song “Rock of Ages” as they departed into “impossible conditions.”

During one of Barbo’s encounters with Webber, whom she affectionately referred to as Bernie, Barbo said he told her, “I believe there was divine intervention, and I still believe it today.”

Once out of the harbor, the rescue vessel’s compass was dislodged and lost, after first smashing through the windshield of the rescue boat and shattering it. Webber was tied to the steer to keep from falling into the water, the only man without a life jacket.

Barbo read a quote from her book of Webber describing how, in spite of his familiarity with the area outside the harbor, he had never seen conditions there such as these.

“I don’t know how the other three hung on, I really don’t because I was strapped in,” read Barbo. “…The way we were being thrown around, they would’ve at least found them dead, but floating.”

Even years after the rescue, Webber told Barbo, he still doesn’t know how he located the S.S. Pendleton, other than for the rumbling crash and clanging of broken twisted metal discernible over the wind and sea that made him say, “There’s something here.” With one searchlight in the dark, they found one half of the boat rising and crashing in the surge with 32 men clinging for life.

Webber and the others didn’t know how they were going to get all the men onto their small boat, except for the use of a Jacob’s ladder they threw across. Some men climbed while others jumped into the sea.

One man known as George Meyers, a large-set man of about 300 pounds others called “Tiny” was seen clinging halfway down the broken vessel with barely a stitch of clothing on and in the later stages of hypothermia.

“So he comes down and Ervin tries to grab him, [Tiny] fell into the water,” said Barbo, “…Ervin had him but a wave disengaged [his grip] and then [Tiny] was lunging into a propeller. Pretty much every bone in his body was crushed.”

Barbo described what Ervin saw as Tiny drifted farther from him, saying, “Tiny looked up and said, ‘It’s okay,’ and he floated away.”

Even when the five men reunited for the first time 50 years later, none of them had ever truly gotten over Tiny’s death, said Barbo.

“With a heavy heart,” Barbo said, “they continued to rescue the others.”

The remaining 32 survivors were brought on board under Webber’s leadership, and with a heavy boat overloaded with men and the seas following from behind rolling right into them, Barbo said Webber remembered Fitzgerald as being the only man aboard who thought they would survive.

“I didn’t know how much longer I could hang on,” Barbo read Webber’s words from her book again. “My attitude was just find land … don’t ask questions, just get off and hope someone finds you.”

Webber steered the ship to where he guessed was north and in time, he spotted a red blinking light he prayed was the entrance to the Chatham Harbor. Miraculously, Barbo stated, it was.

Webber radioed for ambulances and men to meet the boat at the pier, which they found packed with people – little kids, women (who were prohibited from entering the station) – all holding blankets. It was between nine and ten o’clock p.m.

Once the survivors were safely on land, Fitzgerald remained to moor the boat as others wondered, are you nuts? Never mind, as Barbo described the moment. The boat will be fine here for the night. Go rest.

And then something happened, said Barbo. A phenomenon called “circum-rescue shock,” that can happen shortly after rescue from cold water.

“So half these guys fainted as soon as they got there,” said Barbo. Bernie woke up the next day in a hospital bed to find himself covered in dollar bills. “It was all the money that the guys who had been rescued had on them.”

With that money, Webber bought the CG station its very first television.

“That’s the kind of guy he was,” said Barbo. “Very generous, a very kind person.”

The five men – Bernard C. Webber, Andy Fitzgerald, Richard Livesey, Charlie Bridges, and Ervin Maskey – reunited in 2002 on the 50th anniversary of the rescue. Barbo was there when they saw each other for the first time.

“I’ll never forget the tremble in Bernie’s voice when he saw Ervin, and he said, ‘Oh, Ervin,’ and Ervin went right up to him.”

Fitzgerald and Bridges, the two surviving members of the five-man rescue team, met again in 2012 for the 60th anniversary. In 2013, Bridges died and Fitzgerald passed away in 2014.

This February 18, 2016 marked the 65th anniversary of the S.S. Pendleton disaster.

Barbo gave a presentation on February 22 at the Marion Music Hall, sponsored by the Marion Council on Aging. She gave a photograph presentation and referenced her book as she told over 25 listeners the daring story of the S.S. Pendleton rescue. Before ending the event, Barbo recalled Webber’s answer when she asked him how he managed to survive the rescue.

“He said he quartered the sea,” said Barbo. “If you steer into the waves, that’s what he did, and then he said, ‘I don’t even know how I did that.’”

Barbo concluded, “God had his hand on the tiller.” 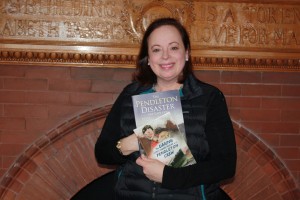